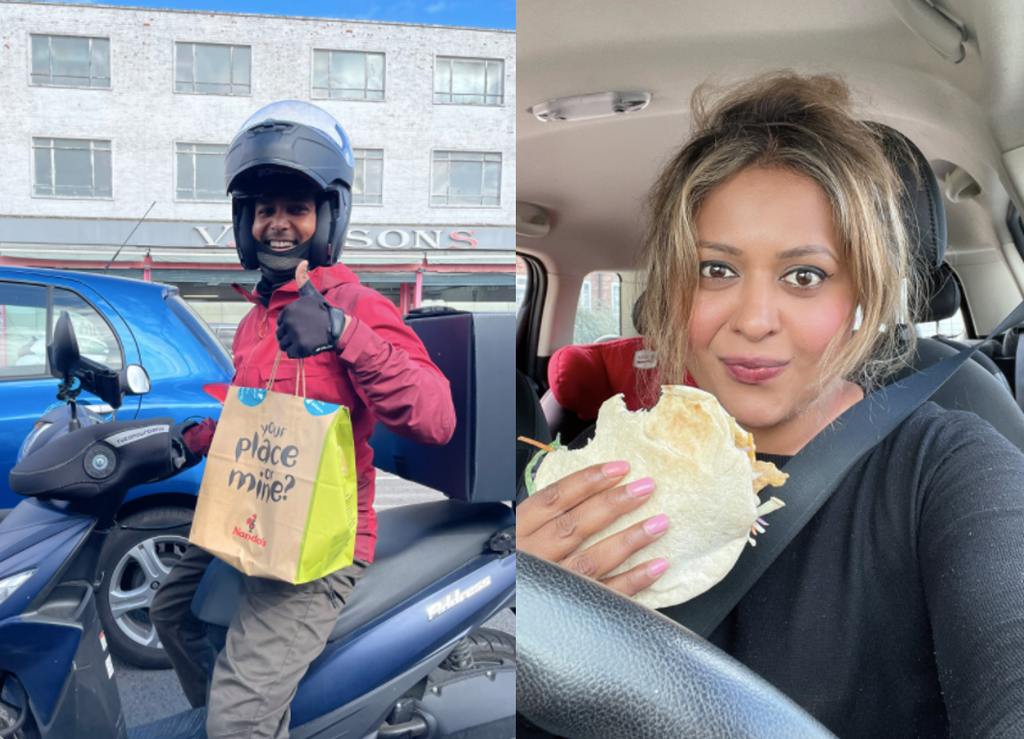 Some motorists around the UK have spent hours waiting in queues at petrol stations this week in the vague hope they can purchase some fuel for their vehicles.

All that waiting, though, can make a person hungry and one woman stuck in a queue on Tuesday just couldn’t wait any longer and took the radical step of ordering a Nando’s chicken takeaway directly to her car.

40-year-old Lily Potkin, was trapped in “the mother of all queues” in Kingsbury, northwest London when she became peckish and, in a “genius” move, decided to order a Nando’s chicken wrap and peri-peri chips from Deliveroo to her car.

Lily said: “It was really funny. The people behind me saw him delivering it and the mood changed.

“Everyone was really aggy and then I could see all the people behind me cracking up. They were just in hysterics.”

Lily wasn’t done there though. A visit from her aunt came along, who lives down the street from where she was queuing. She brought her more snacks to eat while she waited.

Lily added: “I joined the queue just before lunchtime. My car was on zero and I’ve got to do the school run.

“Everything in me was saying ‘go home you idiot’ as I was sat there getting so hungry.

“It took me an hour to get around one side of a roundabout.

“I sat there and I thought about what my husband was having for lunch and got really hungry.

“The traffic was moving so slowly so I thought I could get a Deliveroo where I was.

“I put the delivery pin a little bit further down the road and he just pulled up right outside my window.”

Lily, who works at a tech firm, documented her unorthodox food delivery in a Twitter thread, which is quite an epic tale to say the least.

Other social media users praised Lily as an “absolute hero” and thanked her for brightening up their days.

Lily, who works at a tech firm, described the situation at the petrol station as “absolutely mental” and finally managed to get some fuel a mere two hours after leaving her house. Restrictions meant that she could only fill up her tank with £35 worth of petrol.

Lily compared the situation on the forecourt to The Hunger Games and that there were people filling up canisters with petrol.

“There are normal people marshalling others around the station. It’s a really charged atmosphere,” She added.