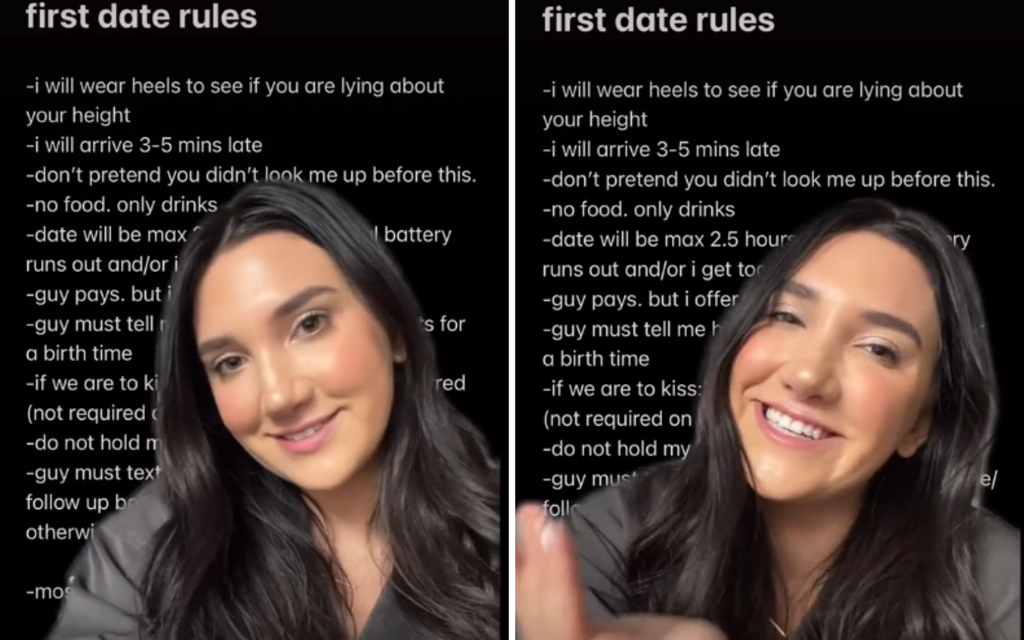 We all know the universal rules of first dates. Be on your best behaviour, don’t be more than a couple of minutes late and don’t spend the night scrolling through social media.

Brooke Miccio, a podcast host and YouTuber, has some more specific rules regarding courtship. This means that men who want to take the TikToker out on a date will need to do a lot more work.

The 24-year-old said she feels like she’s a “seasoned pro”She shared her rules when it comes down to first dates.

She’s 5 feet 7 inches tall and expects men to increase their heights on dating apps. However, she often wears high heels to check if they lie about their stature.

She said: “It’s just embarrassing if I show up in two-inch heels and we’re the same height. Like you’re lying about something somewhere.”

Next, she shares that she always arrives three to five minutes early so that the man can be seated at his table.

She also said, as she keeps her profiles ambiguous, that she expects people to look her up and finds it odd when people don’t admit to doing some research before the date.

“Just say it! It’s so obvious sometimes,”She said. “Honestly I looked you up so it’s fine. I would rather you looked me up to know I’m not a serial killer.”

Next, she will have a no-food rule for the first date. Why? Because if things don’t go well, you’re trapped with them until the meal is finished.

Although it’s easy to linger, especially if you’re having a good time, a first date should not be longer than two and a half hours, she said.

A man should expect to always have his wallet with him “I’m going to say it, especially for the first date if you’re trying to court a woman, the guy has to pay. I’m going to offer, obviously, but it’s a test,”She laughed.

She expects the man to tell her his birthday and, ideally, his birth date. “because I need to go home and do my research.” By getting someone’s birth time and place of birth, you’re able to generate someone’s astrology chart to see if a future together truly is written in the star or not.

What about kissing on a first date? She’s not a fan generally but, if the moment’s there, it’s “less awkward”Kissing should be done seated, not standing.

“There is basically nothing I hate more than having my hand held. I don’t like to hold hands, do not try to hold my hand,”She continued.

The guy must also text her to ensure she gets home safe after the date. “otherwise I’m going to think that you hate me and you had a terrible time.”

She continued: “Also it’s the polite thing to do, like you’re sending a lady home on the streets. To be like ‘hey did you get home safe’ or ‘hey had a great time’ – check in with me first.”

She said, “But most importantly, she said: “We’re just going to go and have fun, that’s what I like to say, let’s have a good time.”

One user left a comment in the section: “To be honest this is fair, like yea it’s a lot of ‘rules’ but it’s literally a stranger you’re meeting up with, of course there’s gonna be some rules and stuff.”

Another thought: “Summary: we wish men had more common sense”.

Miccio claimed she was inspired to create by rules set by @thejarr, another TikToker “rule”Videos to assist her and her viewers plan their calendars

Although she said he should ask if she got home safely, a TikToker recently sparked debate by saying it was a red flag that the man didn’t wait until she was inside her house before driving away.

Even though each individual has different standards of what they expect from a partner, enjoying yourself and staying safe should be the top rules on any dater’s list.