The NFL is the biggest and arguably the BEST American Football league in the world. Other countries have their own versions of this and realistically, none of them are quite up to the standard of the NFL. For example, Canada has the CFL (Canadian Football League) and with its growing interest over the pond in the UK, they have the BAFANL, the uh… British American Football Association… National Leagues. A bit of a mouthful isn’t it? But with more eyes on the sport, you have more people outside of the US getting involved in playing the sport.

Today we’re going to be taking a look at some of the best players in the NFL that AREN’T American. Specifically players from Canada. While it’s true that in terms of popularity, American Football isn’t even close to being the most popular sport in Canada, when it has to compete with Hockey it’s kind of going to be expected really. The viewership numbers are growing, however. In fact, in the 2022 season, Winnipeg Vs Saskatchewan hit 700k average viewers and that’s the CFL not the NFL! Theoretically, these numbers are only going to grow and with more Canadian eyes on the sport you’ll get more Canadian players. But which Canadian players do the young Canadian fans have to look up to? 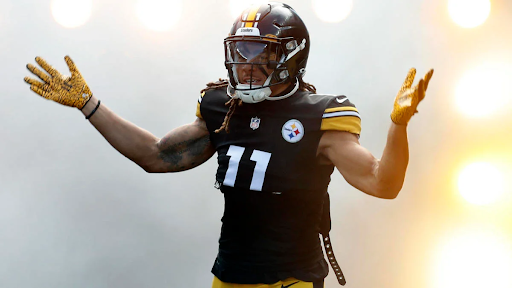 After being picked up by the Steelers in the 2020 draft, Claypool has been making a name for himself in Pittsburgh.

First up, we’ll talk about Wide Receiver from the Pittsburgh Steelers, Chase Claypool. Born in Abbotsford Canada. In his first two seasons with the Steelers, Claypool managed 873 and 860 yards, putting his name on 11 touchdowns, including a solid performance against the browns in the playoffs, where he scored 2 touchdowns. Unfortunately for Claypool however, the change at Quarterback for the Steelers going from Ben Roethlisberger to Kenny Pickett and Mitch Trubisky hasn’t really helped his growth at all. He has managed 225 yards and 23 catches this season, not ideal so far is it? California born, Canadian citizen Alex Singleton might not be pure Canadian, but it still counts, right?

Next up, we have a Linebacker from the Denver Broncos, Alex Singleton. While some may question this one given Singleton was born in Thousand Oaks, California. He does actually qualify for dual citizenship and has a Canadian passport. This is because his mother is from Toronto. Is this a loophole? Perhaps, but even if it’s a technicality it still counts! He has also previously played for the Calgary Stampeders in the CFL, that has gotta count for something surely?

Back to the reason we’re talking about him! Singleton has been a rock in defense for the Broncos, racking up a respectable 47 tackles and three pass defenses, Alex is a huge part of why the Broncos have managed to ship less than 20 points in 5 of their 6 games this season. He recorded a season-high 21 tackles during game week 5 in a very low-scoring loss to the Colts, again however, shipping less than 20 points. An unfortunate 12-9 loss.

Speaking of the Denver Broncos, now is as good a time as any to talk about the current NFL season and where better to start than the Broncos themselves? A valid place to start given the theme of this piece also given it is a game played outside of the US. The Jacksonville Jaguars (2-5) take on the Denver Broncos (2-5) at Wembley Stadium in London, England. But what do the experts think? The Broncos are the underdogs here, at 5/4 a $5 stake will return $11.25, while a $5 stake on the Jaguars at 20/29 will return $8.44. It’s all going to come down to who can step up to the occasion in London isn’t it?

Checking out some of the top NFL betting odds and markets for one of the other games this weekend. We’re going to check out the Miami Dolphins (4-3) next as they travel to Detroit to take on the Lions (1-5). The Dolphins are HEAVY favorites, at 4/7, this means that same $5 stake from earlier will see a $7.85 return, however if you fancy the underdogs with the home field advantage, you can get them at 31/20 which will see a tidy $12.75 return. Not too shabby.

While we’re here it’s worth checking out the chances that any of the 4 teams we’ve mentioned here could go all the way. Starting with the Denver Broncos, they find themselves 100/1 to win it all, meaning $5 returns $505. The Jaguars are the same, also at 100/1. Miami Dolphins are the best of a bad bunch it seems sitting at 33/1, returning $170 from $5. They’re still 13th favorite however! Then last but certainly not least, 2 other teams have that privilege, the Detroit Lions are 300/1, 3rd least favorite team to go all the way. If you believe in miracles however, that $5 would return $1,505. Wild.

At 22 years old, Javon Holland still has a LOT of potential. Will the 22-23 season be his breakout season?

Are you ready for another transition? The next Canadian player we’ll be talking about is Free Safety for the MIAMI DOLPHINS, Javon Holland. I know, seamless. Javon Holland, born in Coquitlam, Canada, made the starting free safety position in the Dolphins lineup his own in 2021 and has looked to keep it that way since. In his rookie season, Holland recorded two interceptions, three fumble recoveries, 10 pass defenses and a nice 69 tackles, very good numbers for a rookie season!

His continued improvement in 2022 ARGUABLY makes him the number one Canadian player ACTIVELY playing in the NFL right now. With 2 interceptions, matching his rookie season and 34 tackles through 7 games, which include a 10 tackle game in a huge win over the Bills in September, Holland is really looking to make this season the one where everyone remembers his name. Needless to say, he is DEFINITELY on track to do so!

I think that just about covers it for this one, SO, time for some questions to get you guys involved. These first questions are specifically for the Canadian football fans amongst you. When you were growing up, were your eyes on the CFL? Or did you primarily watch the NFL? Which American team did you latch onto and what was the reason behind it? Lastly, who were the biggest Canadian players when you were younger?

For football fans in general now, how does it make you feel knowing that the sport’s popularity is growing and appealing more and more to a worldwide audience outside of JUST the Super Bowl? What about all of this talk that has been happening over the last few years about a potential London based franchise for the NFL? Would you possibly like to see that? Does that open the door for other nations to have a franchise based there also or should this be a completely defunct point all together outside of MAYBE some friendly games? Let us know! Until next time, take care!