After a grand opening on Friday, Hrithik’s Super 30 rocked on the second day as well. With the profitable opening of 12cr, on the second day, the movie took a higher jump and successfully earned 18cr. The movie is currently running on more than 3200 screens all over India.

An amazing opening and a consistent success on Saturday show the public’s love towards this awesome movie, its genre and the story. Hrithik’s fans are convinced that this is his best work ever and it also the best movie of 2019.

The fans are loving the character played by Hrithik- Aanand Kumar, who is a mathematician from the state of Bihar. Super 30 is based on real-life events, taking inspiration from a mathematician of Bihar who runs the super 30 program for IIT aspirants. With an amazing dialogue delivery and his over the top acting, Hrithik won all our hearts. 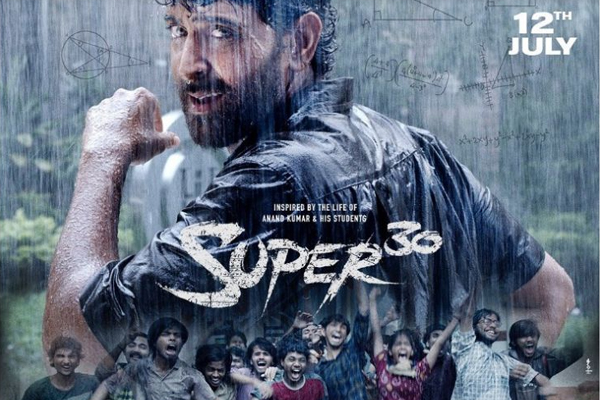 The movie left a great impact on the minds of the young as well as the old. It was appealing to all generations. Super 30 needs to maintain it’s journey uphill. Which won’t be too tough I guess, seeing that even on the second day many schools hit the theatres with their students for this movie. They believe that this will have a very strong effect on their young minds and will shape their personality. And they are not wrong at believing this.

Bollywood’s known celebrities like Farah Khan, Karan Johar, Nandish Singh and Gujrat’s CM VIJAY RUPANI also watched this movie and appreciated Hrithik’s hard work. According to sources this movie- SUPER 30 is gonna take another huge jump on Sunday. They are expecting it to reach 20 to 25cr or more on Sunday. SUPER 30 has been named the MOST INSPIRATIONAL MOVIE OF THE DECADE by many of those who saw the movie.