What is the show about? Is it worth watching? When is it releasing? Let us find out about Succession Season 3: Release Date, Teaser, Trailer, Exclusive Clip, Cast and Latest Updates!

Succession is an American satirical drama television series created by Jesse Armstrong. It premiered on June 3, 2018, on HBO.

Succession follows the Roy family, owners of media conglomerate Waystar RoyCo. The family patriarch, Logan Roy, has experienced a decline in health. His four children – removed oldest son Connor, power-hungry Kendall, irreverent Roman, and politically savvy Siobhan – all with varying degrees of connection to the company, begin to prepare for a future without their father, and each begins vying for prominence within the company. 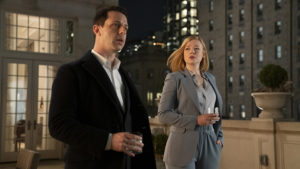 The answer is ‘Yes’! We will soon be having another season of the show. Stay tuned for the latest updates!

The wait is finally over! Here is good news for all of you. Season 3 premieres on 17 October 2021 only on HBO Max. Save the date!

Here Is An Exclusive Clip For You From Succession Season 3

Cast and Characters of Succession Season 3

Most of the main cast will be returning back in the upcoming season. On the show, we will be seeing Hiam Abbass as Marcia Roy, Nicholas Braun as Greg Hirsch, and Brian Cox as Logan Roy. Also, we will be seeing Kieran Culkin as Roman Roy, Peter Friedman as Frank Vernon, and Natalie Gold as Rava Roy. Also, we will be having Matthew Macfadyen as Tom Wambsgans, Alan Ruck as Connor Roy, and Sarah Snook as Siobhan “Shiv” Roy. We will also be seeing Jeremy Strong as Kendall Roy, Dagmara Domińczyk as Karolina Novotney, and Arian Moayed as Stewy Hosseini. Also, we have J. Smith-Cameron as Gerri Kellman, Justine Lupe as Willa Ferreyra, and David Rasche as Karl Muller. Fisher Stevens as Hugo Baker and many others will be there on the show too.