Shadow and Bone Season 1 Ending Explained: What Happens to Matthias and Nina?

Shadow and Bone Season 1 is available on Netflix! If you want to know the explanation for the end of season 1, Read more! Shadow and Bone are as excellent as its star, Alina Starkhov. This is a brilliant adaptation of Leigh Bardugo’s bestselling Grishaverse books. For the novels that will inspire the next seasons of one of Netflix’s most excellent series. 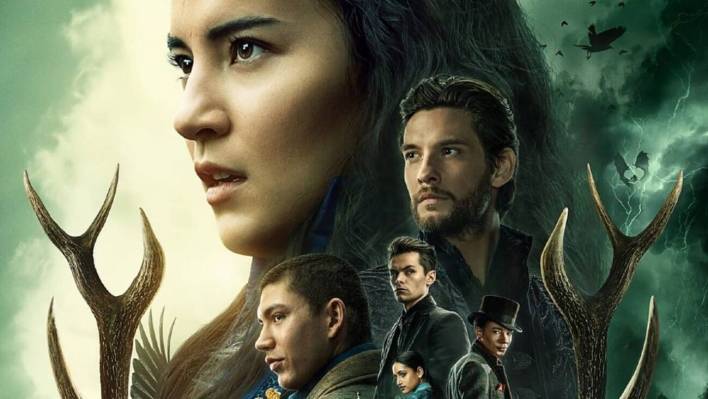 Shadow and Bone is a pure moment of escape, accompanied by topical social commentary and a good old-fashioned story. It’s the next big fantasy sensation. Shadow and Bone Set primarily in the fictional nation of Ravka, a location inspired by Imperial Russia and torn apart by a physical barrier known as the Fold. It is an ocean of darkness inhabited by deadly monsters called Volcra. Worse, it continues to expand, invading small towns and separating the eastern Ravkans from the western part of Ravka and the rest of the world.

Ravka is both paralyzed by this supernatural phenomenon and constantly threatened from all sides. The land’s only hope is the arrival of a mythical ‘caller of light’ who can destroy the darkness and heal the land of Ravka forever. Once you’ve completed the first season, we’ll tell you all about Netflix’s Shadow and Bone Season 1 End!

Kirigan, like Alina, is a scarce type of Grisha. His ability to summon shadows has earned him near-immortality. Several hundred years earlier, he created the Fold by fighting Ravkan soldiers. He hoped to develop powerful amplifiers to increase the Grisha’s abilities with his power, just as Morozova had done with the animals. Instead, he ended up turning everyone in the region into Volcra. As the creator and arguably the most powerful shadow summoner globally, Kirigan appears to have some control over the Volcra.

Earlier, he told Alina that he was a beacon for them. Once he enters the Fold, the Volcras are attracted to him. This is what happens during his fight with Mal. Angry, is he a Grisha? We will tell you everything here. He seems to win when a Volcra attacks him from behind. Alina, Mal, and the others think he’s dead. He created a new type of shadow creature, the nichevo’ya, which has nothing to do with the Fold. The end of season 1 of Shadow and Bone shows a bruised and bloodied Kirigan emerging from the Fold and ordering the Volcras to follow him. It took him a few hundred years, but he finally had an army to help him destroy his enemies.

What happens to Matthias and Nina?

Fedyor and the Grisha catch up with Nina and Matthias at an inn. They plan to kill Matthias or at least bring him back to the Little Palace. Where he is likely to be tortured and killed, Nina devises a plan to save him. It’s a quick thought of his. Nina tells a group of sailors that Matthias is a slave owner. And they arrest him, along with Nina, as a witness. Then, they go to Ketterdam, where Matthias will be tried. Nina overhears Kaz, Inej, and Jesper on the boat talking about the need for a Heartrender, and she is! Interesting… 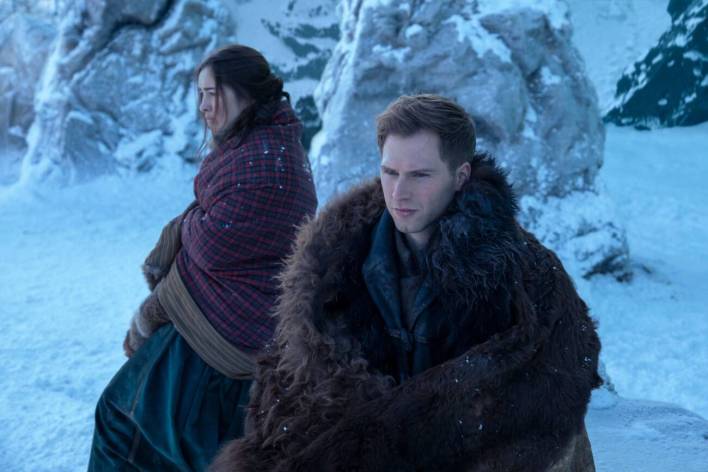 Unfortunately, Matthias does not trust Nina. He thinks she was cheating on him with her witchy, witchy ways. He doesn’t understand that she saved his life. As another inmate puts it, they go to jail long before the trial. It is not good. The end of Shadow and Bone season 1 encourages the audience to imagine what’s to come and brings the gripping story to an appropriate checkpoint as the characters embark on their next journey. It’s a series that has the potential to stick.

Where are Mal and Alina planning to go??

In Bardugo’s second novel, Siege and Storm. Alina and Mal pass Kerch, fearing that such proximity to Ravka could still be dangerous for the Summoner of Light, and settle in Novyi Zem, on the other side of the True Sea. They live in hiding there—safe from bounty hunters and anyone who could cause trouble if they knew Alina’s true identity. Unfortunately, the Darkling always eventually catches up with them, forcing them to come out of hiding and head back to Ravka, searching for more Morozova amps. With this extra power, they hope Alina can withstand the darkness. 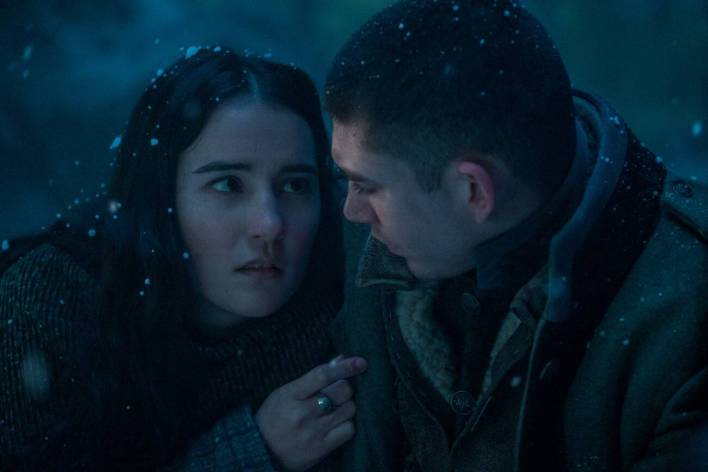 What future for Kaz and his gang??

At the end of Shadow and Bone season 1, Kaz, Inej, and Jesper board the ship to Ketterdam, though they haven’t caught the Summoner of Light. Which means they can’t claim the million krone bounty from the merchant Dressen. This causes trouble for Kaz and the crows. Not only will Dreesen be mad because Kaz can’t deliver the Summoner of Light. But he won’t provide the money the Crows were looking for. 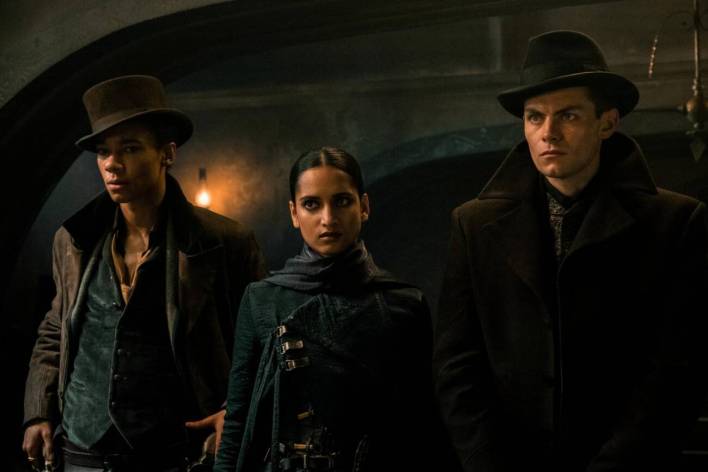 As a result, Kaz will be in debt to Aunt Heleen, to whom he pledged the Crow Club deed to have Inej leave Ketterdam, intending to pay Heleen with the million kroner they were. Would receive for this work. When Alina gave Kaz the hairpiece, she wore during the performance. Kaz will likely be able to repay Heleen and get the Crow Club back on top of paying Inej’s engagement.

However, as Inej says in the finale, Dressen and Pekka Rollins will be angry with the crew when they return to Ketterdam, and even if they repay Heleen, they will still have to deal with a powerful merchant and a leader. Gang. Kaz mentions that he has a plan that will require a Heartrender, and while his exact method isn’t straightforward, it seems this is the way for Nina to join their team.

What Happens in Episode 8?

In Episode 8 of Shadow and Bone, Kirigan and Alina travel in the Fold on a sand boat. He invited ambassadors from various countries on the pretext that they would see the destruction of the Fold. Unbeknownst to Kirigan, Mal and Kaz’s crew are also on the ship. They meet and decide to work together. Kirigan’s plans soon become apparent. Baghra was right. Arming the Fold with Alina’s power, he begins to destroy Novokribrisk, the central city of West Ravka and the epicenter of the anti-Ravkan uprising. 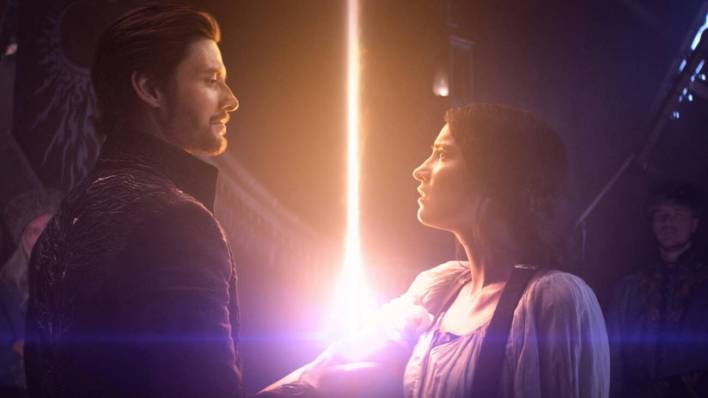 Finally, Alina manages to free herself from her control and discovers the truth about the Stag Amplifier. Kirigan and Mal fight before the first are attacked by the Volcra. Elsewhere, Nina lies by stating that Matthias Helvar is a slave owner, leading to his arrest by Kerch’s bounty hunters. Finally, all the main characters meet on a boat bound for Kerch.