Raised By Wolves Season 2  Updates: American sci-fi TV series ‘Raised by Wolves is a post-apocalyptic drama that sets on a different planet Kepler-22b where two androids- Father and Mother are raising human children. The series premiered on September 3, 2020, on HBO and the second season arrived on February 3, 2022.

Created by Aaron Guzikowski, the TV Series involves a group of talented and brilliant cast members with six of them joining newly in the second season. Now let us see how the actors and actresses starring in the popular drama are in real lives. 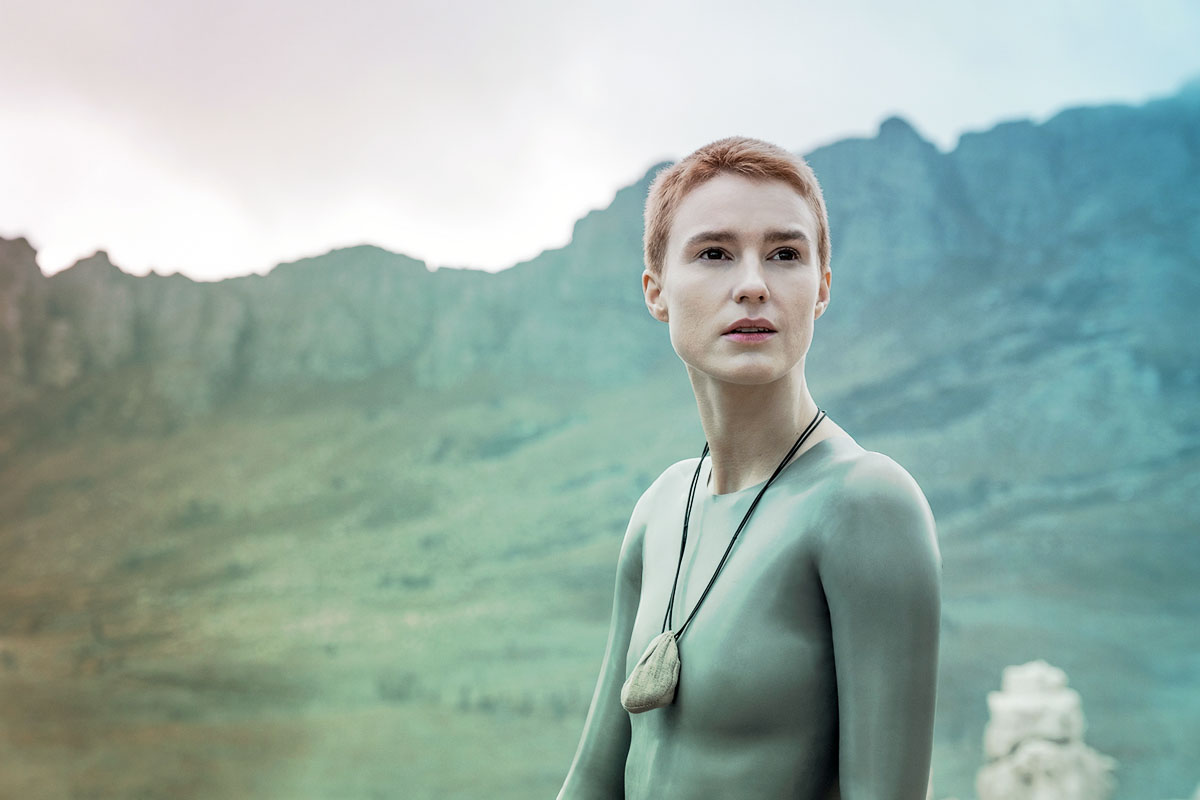 Mother is the android built by an atheist scientist and sent to Kepler- 22b to raise the human community there with her partner Father, another android. At the end of season one, she gave birth to a mysterious serpent-like creature whom she wanted to destroy but ended up setting the childfree at the tropical zone of the planet.

The 35 years old Danish actress has been found starring in other Danish films like ‘The Exception‘, ‘The Horrible Woman’. She has kept her personal life out of the spotlight, so much has not been disclosed about it. Collin is married and the mother of one daughter.

Paul is the son of real Marcus and Sue whose identities get stolen by Caleb and Mary to take over the Mithraic ship. Mother and Father kidnaps Paul with four other children from the Ark of Heaven. Paul carries a pet rat that Marcus gave him. Eventually, he as well begins to hear a voice that he believes to be Sol’s which tells him about the real identity of Sue. He suits her after that.

Felix is a young American actor of 14 years old who is known for performing in ‘Game of Thrones, ‘The Ghost’.

Mother and Father’s only surviving son Campion is born from the embryos taken from Earth. Though the androids raise him as an atheist, he eventually gains faith and empathy. He has natural leadership qualities and grows up a friendship as well as rivalry with Paul.

Father was created alongside Mother to raise the human colony in Keplar-22. Father was once reprogrammed by the invading Mithraic. Mother and Father were sometimes seen to fight over their mission regarding the children.

The 29 years old British actor starred in ‘Jamestown’ series. He is still unmarried and much is not known about his relationship status.

Hunter is the older son kidnapped by Mother and Father. He is a headstrong boy who believes his status to be higher than the rest because of his high-ranking Mithraic official father. Hunter is also very technically proficient and he is able to reprogram Father which eventually helps all the kids to escape Marcus and rejoin Mother.

This 23-year-old Afro-British actor has acted in the miniseries ‘The Long Song’ and film ‘Break’.

Marcus is the later identity of Caleb who goes to the rescue mission of the human children kidnapped by Mother for the human community in Keplar-22.

Caleb and his wife Mary had an android perform surgery on faces and set off to rescue mission to the planet under the identity of Mithraic couple. Later he begins to hear voices that he assumes to be of the Mithraic God Sol which eventually maddens him.

Travis Flimmel is an Australian actor and a former model. He previously acted in ‘History’s Vikings‘. This 42-year-old actor is presently unmarried.

Caleb’s wife Mary takes the identity of Sue, Paul’s mother to take over the Mithtaic ship. She treats Paul as her own son. Once on Kepler-22b, she is confronted with the change of Marcus who now thinks of himself as the prophet of Sol. Sue eventually joins Mother, Father, and the human children. After having the real identity Sue revealed, Paul suits her.

The Irish actress previously appeared in ‘Deceit’ and recently started in ‘Guy Ritchie’s Wrath of Man’. The 29 years old actress won IFTA Film and Drama Awards for acting in ‘The Virtues’. Algar is currently dating Lorne MacFadyen who is also an actor.

The other children kidnapped by Mother and Father are Tempest played by Jordan Loughran, Holly as Aasiya Shah, Vita as Ivy Wong.

Peter Christoffersen (Cleaver)- A leader of the atheists.

Kim Engelbrecht (Decima)- A highly educated scientist and weapon developer of Earth who was formally atheist, but later begins to believe in Sol.

Morgan Santo (Ville)- Built to look and behave like her human counterpart, a child who committed suicide, Vrille is a humanoid android. She treats Decima as her mother.