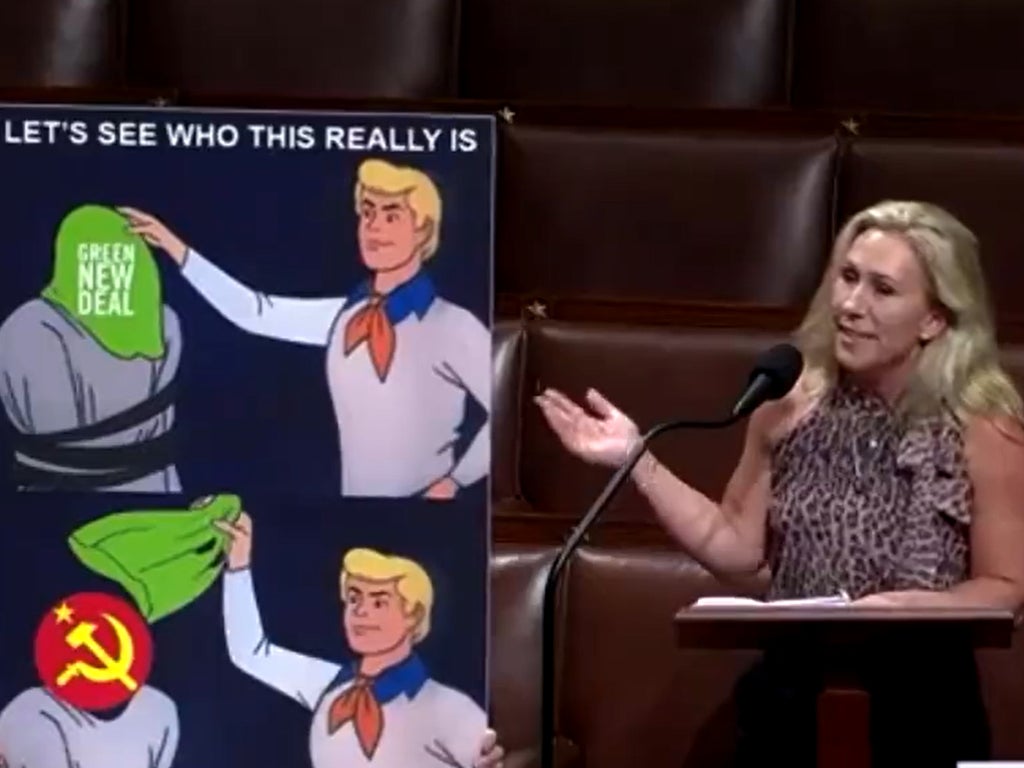 No, you’re imagining things, that really is a Scooby-Doo meme being used by congresswoman Rep. Marjorie Taylor Green to argue against the New Green Deal.

During her speech on the House floor, the Republican thought using a meme from a children’s cartoon show was the best way to communicate her argument about this serious topic.

She displayed a poster featuring the popular meme Fred unmasks an unknown antagonist. The congresswoman revealed that it was the communist hammer-and-sickle which previously appeared on the Chinese Communist Party Flag.

“This is a simple meme that you would find on the internet,” Greene replied, pointing to the poster.

“But this meme is very real. The Green New Deal — surprise — serves China and China only,” She said this, pointing at the sickle as well as the hammer.

However, the memes didn’t stop there, as she then asked an aide to put down the Scooby-Doo meme and replace it with another meme – this time one depicting Chinese President Xi Jinping saying, “I own Joe Biden.”

Despite attempting to get down with kids through creating memes of her own, it appears to have backfired as people couldn’t believe what they were witnessing.

Rep. Adam Kinzinger (R-Ill.), a widely-known critic of the Trump administration slammed Rep. Taylor Greene and tweeted: “Congress is no longer serious with people like this.”

Many people were laughing at Taylor Greene’s stunt, instead of laughing with her.

It was also interesting to note that the meme posters were switched over by an aide.

Elsewhere, someone edited the congresswoman’s meme canvas so that it was blank and asked people to create their own memes from the photo.

It was hilarious to see how creative people were with it.