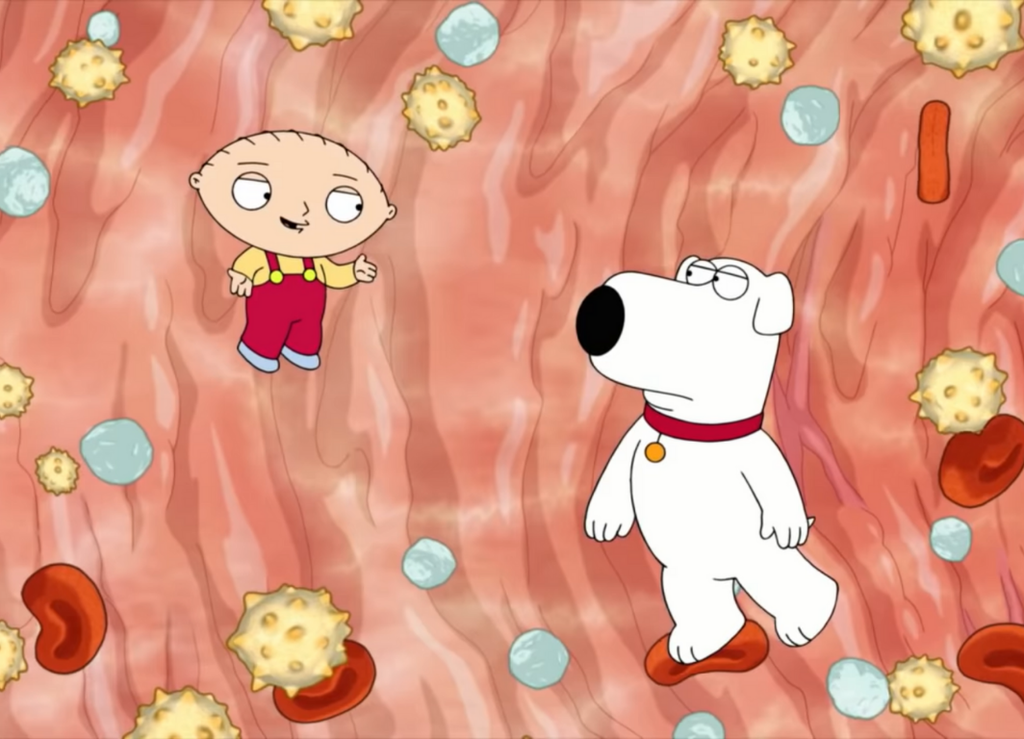 Peter nervously waits to get his jab. When he asks the doctor how it works, he replied: “Think of the vaccine as a large ethnic bouncer, and Covid as the drunk, entitled white kid yelling ‘Do you know who my father is?’”

“Do I have to do everything?” Stewie sighs to himself after the doctor’s reply. Stewie and Brian are then transported into Peter’s body to explain how the vaccine works.

Stewie explained: “The common side effects from the Covid vaccines are generally mild and last a few days, but do you know what can have serious long-term side effects? Covid.”

“What he should understand is that getting the shot not only protects him but also the people around him.”

Stewie then goes on to explain that if the virus were to circulate through the unvaccinated population it could mutate into a variant that vaccines might not be able to protect against.

He added: “Then we’re right back where we started: Gal Gadot singing ‘Imagine.’ We cannot let that happen!”

At the beginning of the pandemic, celebrities were roasted for their cheesy rendition of the John Lennon song. Although Gadot organised the video in a bid to boost spirits, she certainly succeeded in making people laugh as the cringe-inducing video featured A-list celebrities crowing out of tune.

On the Family Guy official Twitter account, the team urged people to visit GetVaccineAnswers.org for up-to-date facts on the jab “so we can all get back to the moments we love and miss most”.

Some took to Twitter to joke about how the Family Guy skit counts as them doing their research, with others praising the show for using its platform to encourage people to get inoculated:

MacFarlane also talked to Kimmel about how it’s ironic that the same network that airs FOX News also signed off on the PSA.

He joked: “I looked around and I saw everyone else at Fox Corp. doing their part to get good science out there and be responsible with their platforms and looking down the barrel of that kind of peer pressure, I said well gosh, we’ve gotta do something too.”

FOX News has been outspoken about the vaccine, with Tucker Carlson this week remarking that the military vaccine mandate will weed out “sincere Christians”, “free thinkers” and “men with high testosterone levels”.

Speaking to CNN this week, the daughter of a man who died of Covid claimed that Carlson “played a role” in her father’s vaccine hesitancy.

Although Family Guy isn’t necessarily known for its educational content, we hope it convinces at least a few people to book their vaccines to protect themselves and others.