Emily in Paris Season 2 is scheduled to be released on Netflix this week, Here we have every detail you need to know about the upcoming season, like its Release Date and premiere time on Netflix with the returning and new cast update, And will the show deal with COVID-19 or not is the most critical question.

It was first premiered on Netflix in October 2020 and was nominated for various prestigious awards besides the Golden Globe awards in 2021. Emily in Paris Season 1 was one of the most-watched rom-com on Netflix.

The show deals with the story of Emily, played by Lily Collins, who moved to Paris from Chicago in search of a new character in her life. Season 1 consists of 10 episodes that deal with her arrival and adjustments in the new city of Paris, where she found a few new friends, Mindy, played by Ashley Park, and Gabriel, played by Lucas Bravo. And Emily’s inclination towards Gabriel.

What could happen in Emily in Paris Season 2? 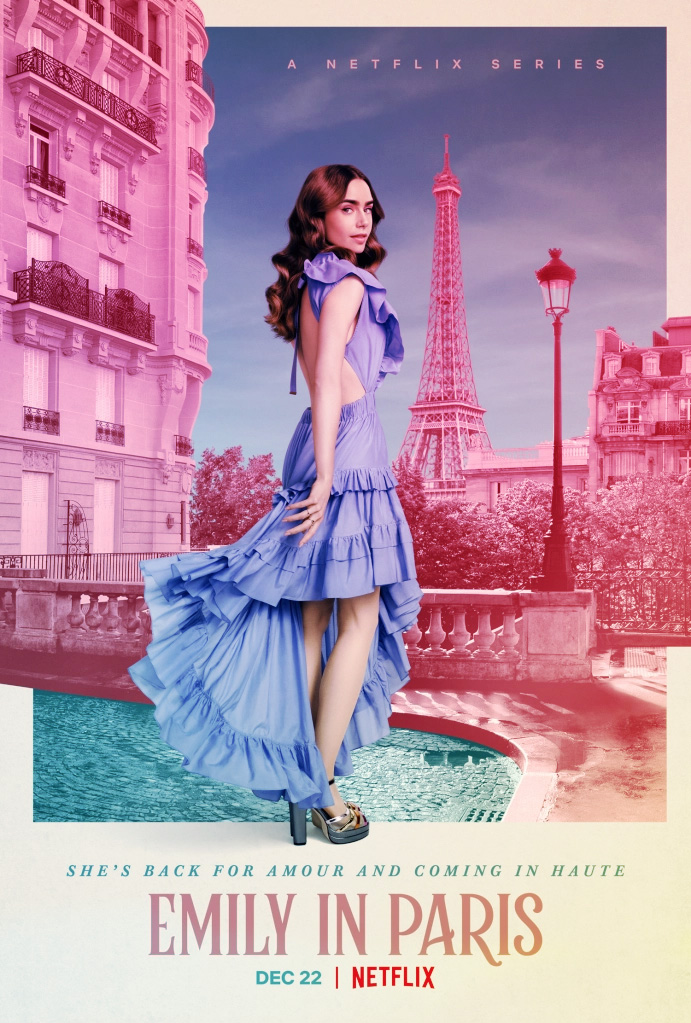 Season 2 of ‘Emily in Paris’ will start where the story ends in season 1, where we had seen Gabriel and Emily spend their night together after Gabriel break-up with his girlfriend, Camille Razat.

But soon after the night, Gabriel had to leave for Normandy to start his restaurant, but because of their new relationship, he chose to stay in Paris, and Camille had texted Emily, “Can we talk?” in the last episode.

These key points show the viewers will see the love triangle between the three in the ‘Emily in Paris Season 2.’

What does the trailer suggest about the upcoming plot?

The official trailer of Season 2 shows how Emily is dealing with the new relationship with Gabriel; her dynamics with Camille have changed now, the old flames and humor between the friends have been changed because of a new love triangle and the introduction of the new guy in her life. In addition, the story will deal with further consequences due to her choices in Paris.

The Confirmed Release Date and Time

Emily in Paris Season 2 was confirmed and announced on November 11, 2021, in a unique way; season 2 was confirmed by a letter from Emily’s office, which said, “The company has extended Emily’s time, and she will further develop and deal with her relationships in Paris.”

After that, the cast had also posted a video on the official Twitter handle of Netflix to announce their return in ‘Emily in Paris Season 2’.

Emily in Paris will return for Season 2! pic.twitter.com/QDOzpzjliz

Netflix’s release date for Emily in Paris Season 2 is December 22, 2021, just before Christmas. And Netflix is famous for its Christmas gifts so we can say that the fans will enjoy the show very much.

Jeremy O. Harris will play an iconic fashion designer, Lucien Laviscount joins as a Brit who gets under Emily’s skin before she starts to like sarcastic charm, and Arnaud Binard guest stars as the party boy owner of a popular Saint Tropez nightclub. pic.twitter.com/lwiX1hZlsQ

The show will be available for binge-watch at midnight IST on December 22, 2021.

The Cast of Emily in Paris Season 2

The principal leads of the show will return in season 2, and a few new faces may also join the cast:

Lucien Laviscount will play the role of Alfie in Season 2

Jeremy O. Harris will have a cameo or guest role as a fashion designer

Arnaud Binard will also have a guest role named Laurent G, the owner of Night Club.

Will the upcoming season deal with COVID-19 situations?

As everyone in the world has been affected by COVID-19 situations, few shows have already shown it in their new plot. But as per the interview of Lily Collins with Variety, she revealed that the show premise would not deal with the COVID-19 situations in the upcoming show. When she was asked about the reason behind the decision, she said

“The reason for the omission of the global pandemic in the realm of the fictional Emily in Paris is because it brings views ‘a sense of escapism’ to views”.

Fans are waiting eagerly for Season 2 of the show; I will review the whole season here as I am one of the fans of Rom-Com. So please Subscribe to us on Google News to stay updated.