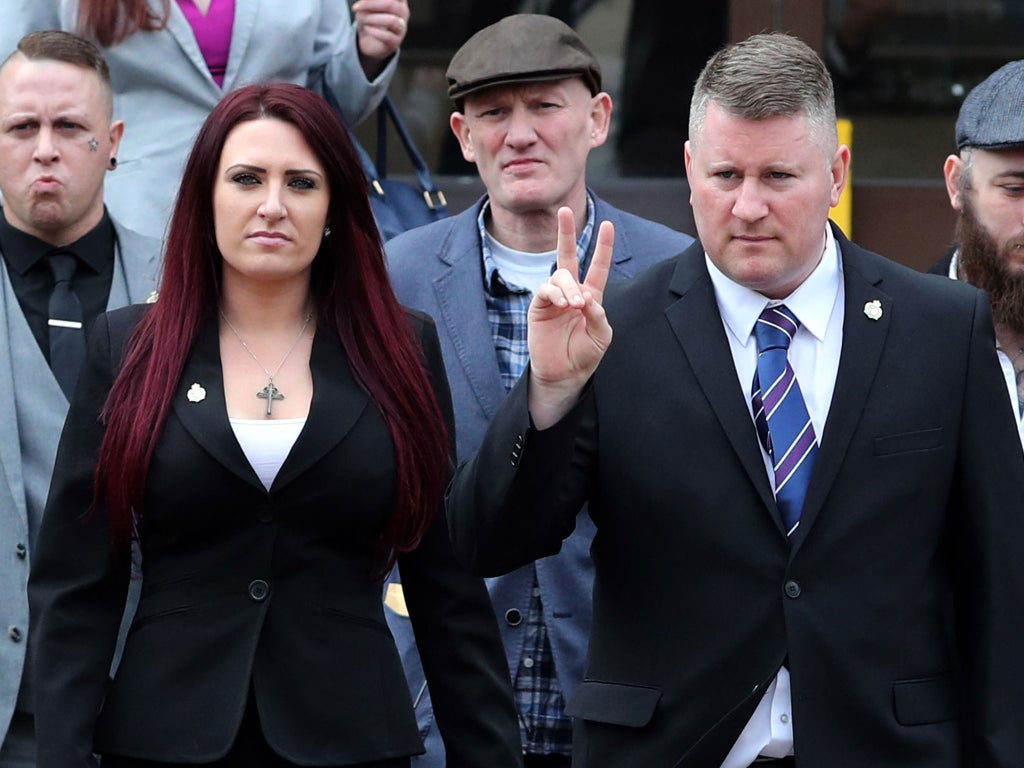 The far-right group known as Britain First has been allowed to register as a political party in Great Britain, in news which has seen criticism hurled at the Electoral Commission.

The watchdog, which keeps a register of all political parties in Great Britain and Northern Ireland, announced the decision on its website on Monday, and said the party had “met the legal criteria” for registration.

In a statement emailed to supporters following the regulator’s decision, Britain First described it as a “stupendous victory” for the movement and confirmed that they would field candidates in future elections as a “fully-fledged political party”.

“Although our street activities will continue, this day marks the birth of Britain First as a traditional political party that will take the fight to the establishment through the ballot box,” They said.

Their successful application to the Commission comes after the group was “statutorily deregistered” in 2017 for administrative reasons.

The decision has been met with anger by Twitter users, who have described the group as “grotesque” and “fascist”:

Founded in 2011 by former members of the British National Party, and described as “anti-Islam” and “anti-immigration” by HOPE not hate, Britain First first registered as a political party that same year – according to Electoral Commission records.

It’s now led by Paul Golding, a convicted criminal who was previously a member of the National Front.

Golding was once the leader and has been accused of many scandals. He is also convicted of numerous criminal offenses, which we regret to be listing here.

In 2014, another founding member of Britain First, Jim Dowson, stepped down after the political group carried out what he described as “unchristian” mosque invasions to hand out leaflets and bibles to Muslims – according to a report by The Mirror at the time.

“No matter how many times I told [Golding] I did not want decent Muslims intimidated, he just continued doing it.

“I have come to the conclusion that no matter how hard I tried, you cannot escape from the fact that the group is being overrun with racists and extremists,” According to Dowson, the outlet was informed.

The “mosque invasions” later led to an injunction being requested by Bedfordshire Police, as the group had targeted mosques and Muslims in the county.

This ban banned Golding’s entry to any mosque in England or Wales.

Turning their back on Sadiq Khan

While Britain First can now stand in elections again, it wouldn’t be the first time if Golding decided to put his name on the ballot paper, as he stood for the party in the 2014 European Parliament elections, and in the 2016 election for Mayor of London – won by Labour’s Sadiq Khan, of course.

In both elections, Golding only managed to achieve around one per cent of the vote, but it was his reaction to Khan’s mayoral victory which made headlines at the time, after he chose to turn his back on the winner.

Golding told Buzzfeed News at the time that the move – which was mocked online as looking like he needed to urinate on stage – was not racially motivated.

“Racist? I didn’t turn my back around because he’s Asian. I turned my back on his because he’s a vile man. The extreme left lunatic fringe of Labour have taken over with Corbyn,” He said.

Khan was also described as “London’s Islamist mayor” by deputy leader Jayda Fransen, who said in an email to supporters that there is “an increasingly shrinking number of Britons left in the capital overall” and “far too many Muslims”.

We don’t think we need to explain why that’s a load of racist nonsense.

Golding’s campaign for Mayor of London also attracted criticism for using the murder of Fusilier Lee Rigby – who was killed in a terrorist attack in 2013 – as part of their party election broadcast.

This was despite Rigby’s family saying in a statement that they had “repeatedly asked” Britain First “not to use Lee’s name to promote their views”.

In 2018, both Fransen and Golding were found guilty of religiously aggravated harassment after distributing leaflets while a gang-rape trial was underway.

Both were convicted on a joint charge after they banged on the windows and doors of 555 Pizza in Ramsgate in May 2017, with Fransen shouting the words “paedophile” and “foreigner” during the incident.

Just to remind you of how little Britain First care for cold, hard facts, Golding shared a video on Twitter in 2017 of individuals celebrating something, writing: “Oh look, a crowd of ‘moderate’ Muslims celebrating the Paris terror attack in London.”

Except, that wasn’t what they were celebrating at all. Evidently.

The reason they were chanting “Pakistan” was because they were celebrating their team’s victory in a cricket game.

“You numpty,” As one person commented at that time.

Back in November 2017, when Fransen and Golding had Twitter accounts, the former made headlines when her tweets were retweeted by then-US president Donald Trump – a move which led to Theresa May’s official spokesman (back when she was prime minister) to say “it is wrong for the President to have done this”.

One of Fransen’s videos claimed to show “Muslim migrants beating up a Dutch boy on crutches”, another was captioned “Muslim destroys statue of Virgin Mary”, and a third read: “Islamist mob pushes teenage boy off roof and beats him to death”.

The retweets came not long after Fransen was arrested over a speech she made in Belfast in August, as part of a demonstration by a group calling themselves Northern Ireland Against Terrorism.

She was later charged and ordered to serve 180 hours of community service in May 2019. Her Twitter account – along with that of leader Paul Golding – were suspended by the social media platform a month after the retweets.

The political group then had their Facebook page removed in 2018.

In 2016, the political group were forced to issue a statement amid reports that Thomas Mair, the man who murdered Labour MP Jo Cox during the 2016 referendum campaign, shouted “Britain First” during the attack.

A senior member of the group told ITV’s Rohit Kachroo at the time that Mair was “categorically not a member of Britain First”, while Golding issued a video before Cox’s death saying that Britain First “had nothing to do with it”.

“We would not condone actions like that. We carry out protests and we stand in elections … so that’s the kind of political activities that we carry out.

“Yes, we do direct actions sometimes … but this kind of thing is disgusting. It’s an outrage.

“I hope the person who carried out this heinous crime will get what he deserves,” He said.

Oh, and Golding’s been convicted on terrorism charges, too, after he refused to hand over the passwords for his iPhone and Apple computer to police when he was stopped at Heathrow Airport in October 2019.

Golding, along with other members of Britain First, had just come back from Russia, where they carried out media interviews and visited the country’s parliament building in Moscow.

They were stopped by Schedule 7 of Terrorism Act. Golding was accused of wilfully refusing compliance with a legal duty.

He was then found guilty following a trial at Westminster Magistrates’ Court, which saw him handed a nine-month conditional discharge. He was also ordered to pay a victim surcharge of £21 and £750 in costs.

It isn’t just Muslims which make Golding angry, as he also got upset in 2017 about being unable to eat a certain delicious takeaway, apparently.

Speaking to a crowd of supporters, the Britain First leader said: “I can’t go out and get a chicken tikka masala now because every single takeaway restaurant serves Halal meat.”

You absolutely can, Paul – though whether anyone would want to serve you because of your actions is another issue entirely.

In both 2020 and 2021, Britain First carried out protests inside and outside hotels which were accommodating asylum seekers – individuals the far-right group falsely claimed were “illegal immigrants”.

Police were even called to a hotel in Nottingham in April after Britain First gained entry.

However, when they appealed to members of the public to send in information about places which could be housing these supposed “illegal immigrants”, pro-migrant groups saw it as an excellent opportunity to carry out some trolling, in what one person described as a “wild goose chase”.

In a video featuring Golding and regional organiser Ashlea Simon, the latter explained that “when we visited these hotels, we were met with empty rooms – no one in the building”.

Finally, on the same day that Britain First became a registered political party, Golding and Fransen agreed to pay “substantial damages” to the Halal Food Authority and two of its former employees after they falsely accused them of funding terrorism.

We should mention that Fransen stepped down as deputy leader in 2019, and later that year a secret recording was shared in which she can be heard saying that Golding “tried to come at me, tried to hit me [and] said you were going to kill me and threw a bottle of drink at my face”.

Golding would later say in the recording that “the only girls I lay a finger on in my life is [name withheld] and you”.

When the BBC put these allegations to Golding, he didn’t respond to their specific questions, instead saying “I have been advised to warn you that any libel or defamation will result in legal proceedings.”

We really hope that Britain First’s latest tenure as a registered political party is short-lived, too.