Why Cricket Fans Shouldn’t Miss Out on Playing Fantasy Cricket

Invented by the English, cricket is immensely popular in India. It is often said that cricket is an Indian game accidentally discovered by the British. In India, this sport is almost like a religion and has the ultimate power to bring all Indians together. The popularity of cricket has reached a point where it is no longer just a sport, but a religion for its lovers. If cricket is their religion, cricketers are nothing short of idols who entertain spectators with their endlessly nail-biting performances on the ground.

People associate strongly with cricketers and their game, and we have all seen diehard fans shouting at the TV screen at home, instructing the players from their couches. Chants of “Kohli, hit a four!” and “Bowl him a yorker, Bumrah!” are common during an international cricket match. These cricket fans can now select their teams, their players and their order of play, and get the satisfaction of controlling the game for a cricket team virtually. How is that possible? You might ask. The fantasy cricket game is tailor-made for people who wish to control a cricket game’s play and team composition in the comfort of their homes. Download the free Howzat fantasy sports app available on the Play Store and play fantasy cricket for free. 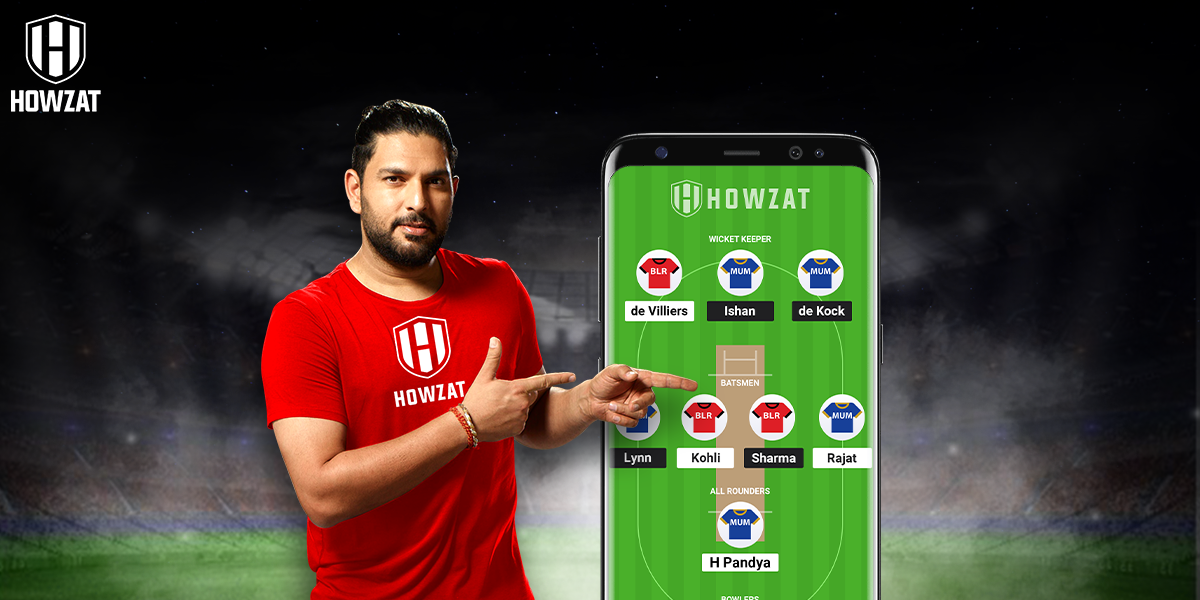 What is fantasy cricket?

Fantasy cricket lets you select your own team and participate in the game virtually. When you play fantasy cricket, you get to control the most powerful part of cricketing strategy, thus making or breaking a team. Every cricket spectator would know how crucial even the tiniest line-up change can be. Fantasy cricket is a game that requires a lot of background knowledge and information about players. It is not just a strategic but also a predictive game, since it is based on your predictions of the form and ability of the player in the actual game on the field.

In fantasy cricket, a player can select his/her own playing 11 from a select pool of cricketers who would be playing the match. You get only 100 credit points to select your team. Every player is worth certain points. The maximum number of players that you can select from one team is 7. You need to pick a combination of 3 to 6 batsmen, 3 to 6 bowlers, 1 to 4 wicket keepers and 1 to 4 all-rounders.

The goal of the game is simple: to defeat the opponents’ team by as large a margin as possible. So stay on the lookout as there are new cricket matches held every other day. Try to learn more about each player and each pitch so as to best be able to predict their game on the day of the match. You can play fantasy cricket in all formats of the game, which include T10, T20, ODI and Test cricket.

Getting started with fantasy cricket

First and foremost, download a great fantasy cricket app like Howzat from the Play Store onto your mobile phone. As soon as this is done and you have signed up, you will have to select a match from any of the upcoming cricket matches, and you’re good to go! Select your own fantasy team by selecting real players. You automatically get points on the basis of your players’ actual performance on the day of the game.

Fantasy cricket has an exponentially growing fervor, since it combines the comfort of sitting at home with the enthusiasm of the most popular Indian sport. All you need is a stable internet connection and a mobile phone to join the league of thousands of players already playing the game. Join contests, select your own cricket team, control the game with your cricketing knowledge. If you have a good knowledge of cricket, you can also play fantasy cricket for real money and win big cash prizes on the Howzat cash gaming app. You can download the Howzat cash app from the official Howzat website. Join the world of fantasy gaming and enjoy the thrill of cricket right at your home. Happy gaming!