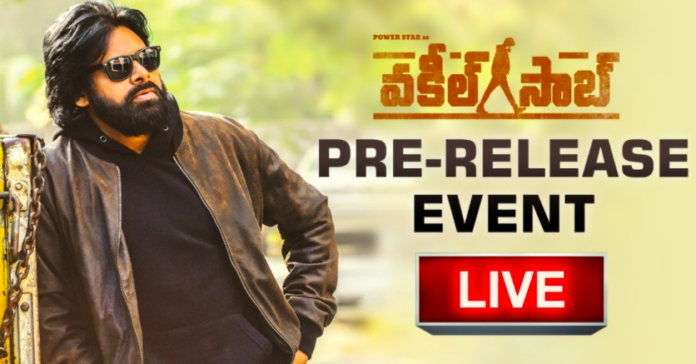 The famous, talented star Pawan Kalyan will return to the theatre with his next movie Vakeel Saab produced by Bay View Projects and Sri Venkateswara Creation. Both the writer and the director of this movie are Sriram Venu. This movie can be considered as the beginning movie for Pawan Kalyan after his political career from the Jana Sena Party. A few times earlier, Sri Venkateswara Creations have also declared the pre-release event date for the movie. And already known the movie will hit the big screen on 9th April 2021.

Casts for the Movie

The Plot of the Film

This movie is the remake of the Hindi blockbuster movie “Pink”. The story revolves around the three girls who surrender to the crime. To defend them from the incident, a senior advocate also joins the picture. The lawyer has bipolar disorder. In Bollywood, the legend Amitabh Bacchan played the role.

Just a few moments earlier, the makers had declared about the pre-release event. At the same time, they have also released the new poster of the movie. As per the poster, the film’s pre-release date can be considered the 4th of April. And as decided by the makers, the venue for the event will be in Shilpakala Vedika.

There are some primary guidelines for the event. A few of them are:

Only those people who are having a credible pass are allowed for the event.
Inside the premises, only a few people are permitted.
And as the situation demands, a mask is mandatory for the visitors to join the event.

There is no doubt that Vakeel Saab, among the top-rated films, also marks a place. The cast includes all the A stars actors in the movie. And as an addition, the born star Pawan Kalyan is also returning to film after a long time. The popularity of the film can already be imagined.