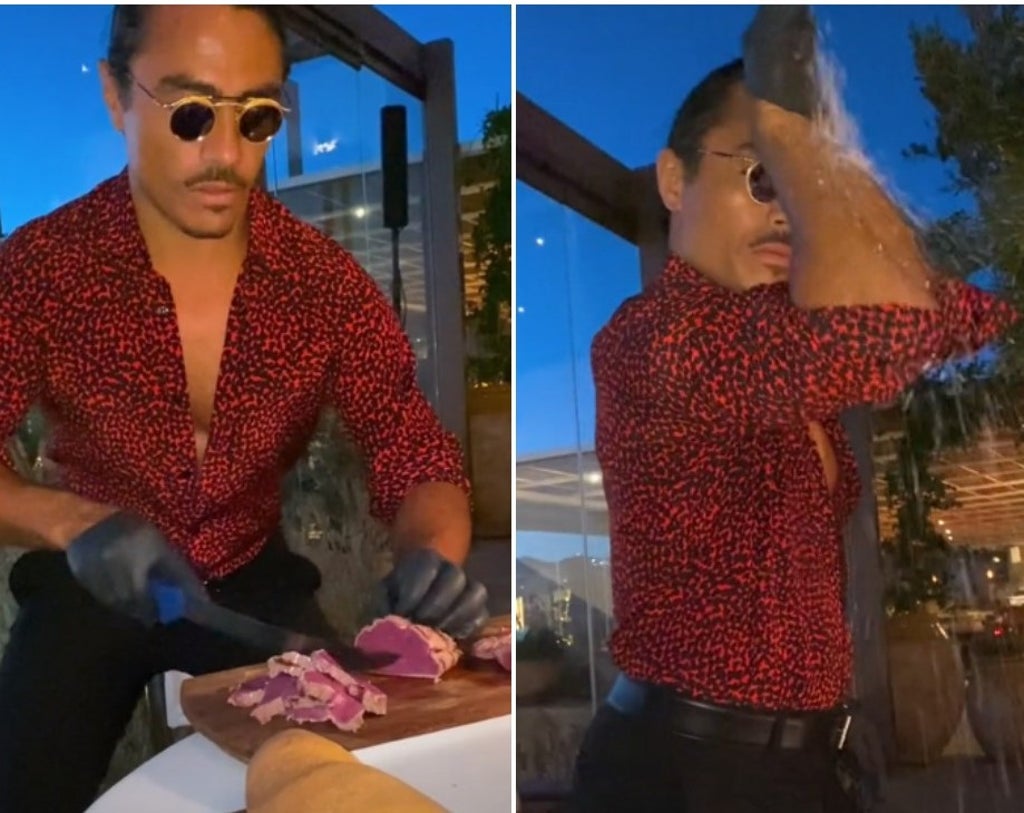 Viral sensation and chef Salt Bae – real name Nusret Gökçe – has recently caused an online storm thanks to the food and drink prices at his new London restaurant.

It all began when a customer shared his eye-watering bill from the establishment, Nusr-Et in Knightsbridge, with the receipt showing a giant tomahawk steak priced at £630 and a single Red Bull costing £11.

Now, a new TikTok video by food account Notorious Foodie (@notorious_foodie) is making the rounds which provides an insight into what you can expect at Salt Bae’s restaurant if you’re willing to fork out for the experience.

In the footage, recorded from the customer’s perspective, Salt Bae can be seen at the end of the table slicing up a joint of raw steak before transferring the slices onto a plate, which is decorated with what appears to be a large chunk of bamboo.

Then he turns his attention to a baguette. He tears it up with his naked hands, then chucks the steak on top. Finally, he drizzles hot butter over the food to allow the meat to cook.

It wouldn’t be the full Salt Bae experience without the signature move from the man himself and the chef can later be seen doing his customary salt sprinkle, hitting off his arms as it landed on the food.

The steak is then left to marinate in butter for at least 30 minutes.

The customer who splashed the cash appears to be impressed with the service and the £180 meal.

However, the same can’t necessarily be said for viewers, who were divided over whether Salt Bae’s service is truly worth the money or not.

The TikTok comment section saw many people criticize the chef and restaurant. It now has over 360,000 views.

One person wrote: “And that will be £1500 pounds for some stale bread, a bone, some meat, melted butter and elbow salt.”

“Just watching this cost me £790,”Another person laughed.

Someone else added: “I’m an ex-chef and I wouldn’t dream of handling raw meat then ripping bread without changing gloves or washing hands, but what do I know.”

Salt Bae on the other side had plenty to defend him, and those who choose the restaurant.

One person wrote: “Wow, the comments on here are saltier than Salt Bae. How people spend THEIR money is THEIR choice. Calm down.”

“Hats off to him if he can get people to pay for it,”Another person said

Someone else joked: “He actually made a whole career from low-key just being extra.”

“Yes he’s expensive, no I wouldn’t personally pay for it but this man followed his passion and made it far enough to charge what he likes, his success,”A fourth person responded.

Whatever side you’re on, we can all agree that Salt Bae is very good at getting people to talk about him and his food.