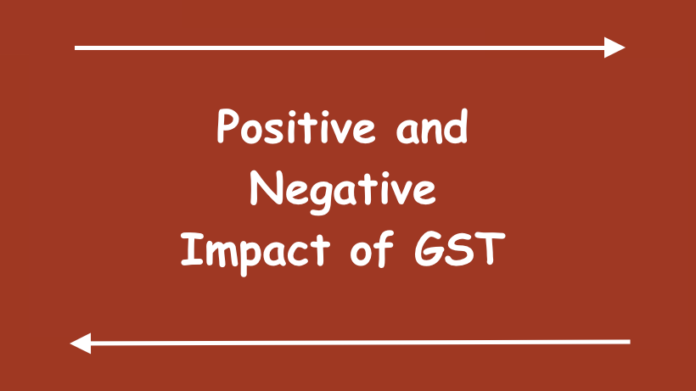 The Goods and Services Tax regime brought a complete change in the Indian tax system, and as a result, the GST impact on the economy has been significant. Some complex regulations make it difficult for taxpayers to stay GST compliant, like the several returns an individual needs to file in a financial year. Still, there are also simplifications GST has made to taxes and invoices. The e-invoicing and the GST invoice format in excel are examples of how GST simplified a few aspects connected with taxes. But considering the overall influence on the taxpayers, the GST has been a gamechanger. Under the actual impact of GST on taxpayers, it’s essential to look at the positive and negative elements and effects of this new tax regime.

The positive impact of GST:

Taxes subsumed: Goods and Services tax removed 17 types of taxes present in the previous tax regime. GST lifted the Central Excise Duty, Customs Duty, Service Tax, Central Sales Tax, Luxury Tax, Purchase Tax, Entertainment Tax, State Value Added Tax Etc. The removal of taxes created a massive change to the structure of how taxpayers filed their taxes and returns, and this, in turn, variously helped businesses. It started to ease of doing business. There would be several tax forms required to be filed by a taxpayer or company in the earlier regime. It would make a more significant problem for companies that dealt with fast-moving goods and services. There would also be complications with logistics, accounts, records, etc., because it would make the management of taxes difficult. With all the taxes removed, an enterprise can function efficiently and stay compliant easily. 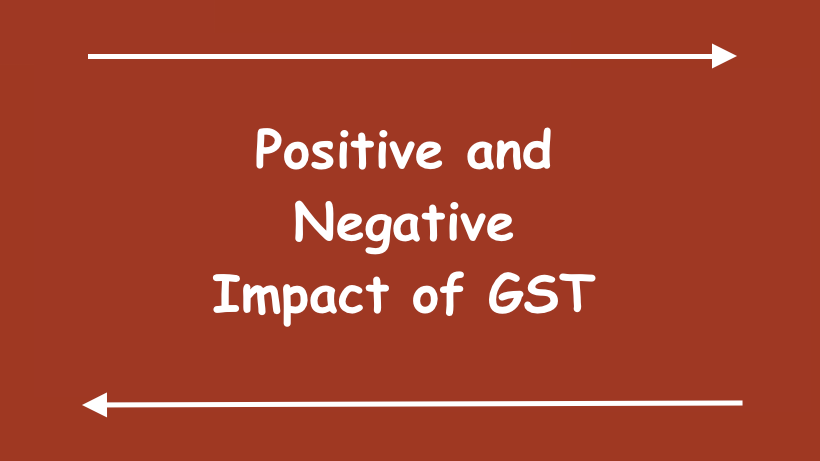 Cost-effective change: Another benefit from removing various taxes is the way the prices of goods and services are reduced. A supplier is required to produce different forms and pays separate taxes when supplying on an inter-state level. It was not only time-consuming but also created hurdles in terms of the proper supply of goods. There were more significant chances of mismanagement that led to higher chances of loss and the levy of penalties. All this and the levy of several taxes on goods and services would make the price of commodities and products rise exponentially. With the removal of taxes, it is cost-effective as well as creates ease of doing business. It also indirectly helps taxpayers in saving taxes.

Transparent tax system: Transparency increased substantially. With the concept of GSTIN, any business can now check and verify the authenticity of any individual or a taxpayer. It helps in conducting business without fear. There is also much control over corruption because of the invoice system. Under the GST regime, suppliers should mention the movement of goods at every stage. Through this, a particular product or service can be tracked from its origin to the end buyer. Through this, there is transparency, and it helped in the better collection of taxes. Better collection of taxes means more schemes that will eventually positively help taxpayers.

The Negative Impact of GST:

Complicated rates: The structure of tax rates has been a hurdle for some businesses because there are frequent changes in the tax slabs of different goods and services. It also is a hassle because of how volatile some sectors could become. It has had a significant negative impact on some businesses which have felt burnt of this to an extent where they have incurred losses. It has affected some taxpayers indirectly in a negative manner.

Price rise in some commodities: Few sectors saw an increase in taxes, which directly affected the price rise of goods and services in those sectors. Taxpayers dealing in such products had to shell out higher taxes, negatively affecting revenue. This also affected the general consumer, and the buying power went down.

Inflation rate: From July 2017 to January 2018, the inflation rate increased from 1.79% to about 5.11%. This is seen as a direct impact that happened because of the implementation of GST. Inflation means the devaluation of money caused by a permanent increase in the cost of the product. As the price of some crucial products increased, it seems that the demand-supply chain got affected, and hence there was a massive negative change in inflation. An unfavorable change in inflation directly affects the general taxpayer as it affects the whole economy.

The framework of paying taxes: Under the GST regime, registration and paying of taxes are through the GST portal. Many taxpayers are not tech-savvy, and they often find it challenging to register themselves online or pay taxes through the portal. It has created a negative impact because some taxpayers find it difficult to pay taxes online and hence fail to remain GST compliant, which affects their credit score and business negatively.

The government collected 1 lakh 5 thousand crore rupees in goods and services taxes in February 2020. This is an increase of 8% as against the collection in the same month last year, February of 2019. Though the tax collection increased GST’s impact on the economy is still a debatable subject, whether negative or positive. There is some ease in the GST regime for a taxpayer and its functions like creating a GST invoice format in excel or with the newly launched e-invoicing option. However, the larger picture remains complex to judge. With some changes in the tax structure and framework, there is hope for a more positive impact for taxpayers and the economy.

There is a significant change in the Indian GDP growth rate since 2017, and the GST impact on the economy is said to be one of the factors. To understand the effect of GST on GDP and the economy, it is vital to understand the positive and negative influences on businesses and taxpayers. The simplification of GST like