Driving is dangerous business, and it’s essential that the driver keeps their attention on the road at all times. Which is why we’re pretty appalled at the news that Tesla’s infotainment system is still able to play video games while the car is in motion. 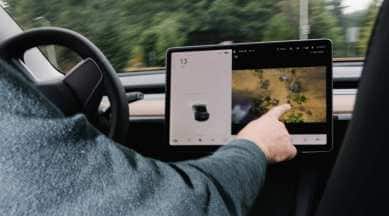 That’s according to The New York Times, which reported that Tesla rolled out an update over the summer allowing games like Solitaire, Sky Force Reloaded and The Battle of Polytopia: Moonrise while the car is moving.

Tesla’s infotainment screen does a lot of things, and how much depends on the model itself. More affordable models, like the Tesla Model 3 and Model Y, don’t have a typical gauge cluster behind the wheel, so all that information has to be displayed on the screen in the center console.

That includes speed, range and so on. That’s in addition to navigation, audio control and all those other things you’d expect to see on a modern infotainment screen. In other words, not only is the center screen designed to be in view of the driver, it’s often essential viewing — especially in a Tesla.

Tesla’s screen does display a warning, noting that “playing while the car is in motion is only for passengers.” That suggests that the car’s computer knows it’s moving, but it is able to let someone play games anyway.

You could easily argue that it’s totally unnecessary to have a car that can play video games in the first place, but the opposite is also true. From a passenger perspective, it’s useful to be able to do something beyond stare out of the window.

But there’s absolutely no circumstance where the driver should be able to see what gaming is going on. Whether that’s to avoid being distracted by what’s on screen, or to prevent them from trying to play games when they should be concentrating on the road.

Relying on common sense to police driver behavior is not such a good idea. Even though the majority of drivers wouldn’t dream of playing video games in the car, some still will. After all, there are still plenty of people who text and drive, and the obvious solution is to just disable it when the car is moving.

Other automakers already do this, and it’s not a particularly new development. Back in 2014, there was a problem of British drivers purchasing devices that would bypass in-car safety features and let them watch content on dashboard screens while the car is moving.

Android Auto also added support for Game Snacks earlier this year, letting drivers play mini games on their car’s center screen. However, the app only works while the car is parked, and flashes up an error message if you try to play when the car is in motion.

It’s also worth noting that watching a screen while you’re driving is a crime in some places. The U.K., for instance, has had such a law on the books since the 1980s, criminalizing using a screen for anything other than displaying driving information. U.S. states also have various different distracted driver laws, and while they’re mostly focussed on cell phone usage they may well apply to other devices as well.

Really Tesla should have known better, because driving safety is serious business. Unfortunately The New York Times said the company, and CEO Elon Musk, did not respond to requests for comment.