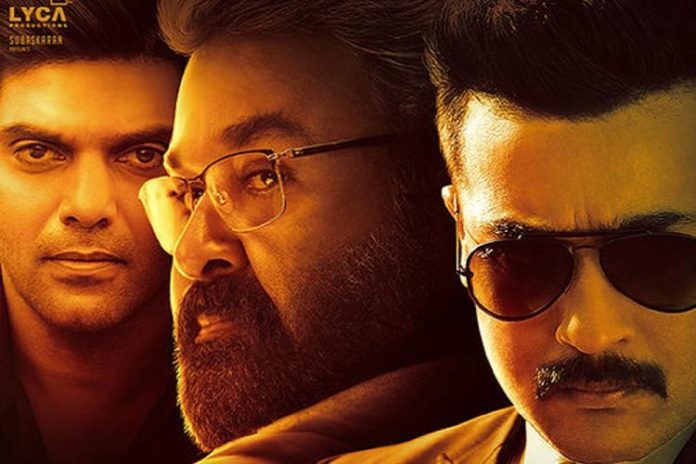 This year Suriya birthday is packed with double sweetness. On July 21, Lyca Productions will launch the Grand audio release of Kaappaan.

Apart from Suriya, Kaappaan features Kerala superstar Mohanlal, Tamil youth star Arya. With all these stars filling the big screen it will be candy for your eyes.

The Bollywood cast Boman Irani is one of the main aspects of this movie. This is his Tamil movie Debut. The huge fanbases of all these actors are awaiting any paparazzi updates. The official trailer and Siriki song came out already. Expectations of this movie are skyrocketing. Official circles report now that, as a celebration to superstar Suriya’s birthday. They will do the worldwide audio release of the movie on July 21st.

This is the first time, Mohanlal and Suriya sharing the big screen. As both of them have a huge fan base both in Kerala and Tamil Nadu, makes it the most awaited movie of South India.

S.S Rajamouli has tweeted depicting his Telugu version of the movie. Named “Bandobast” made the movie more popular.

The nickname of the movie is “Suriya 37” as it is the 37th movie of the superstar.
The movie is set in New York, Brazil, New Delhi, and Hyderabad. It is shot in a total of 10 countries.

Mohanlal is appearing as the Prime Minister of India. Arya would likely be his son and Suriya as NSG Commando. Suriya’s first movie this year was NGK a political thriller movie with Sai Pallavi. which received mixed reviews from critics.

The team is currently filming the stunt scenes with Choreographer Greg Powell. He is well known for his work in Skyfall and Bourne Ultimatum. Satellite rights have been acquired by Sun Network. Next movie by Suriya is Soorarai Pottru. The movie is all set to hit the theatres on August 30.