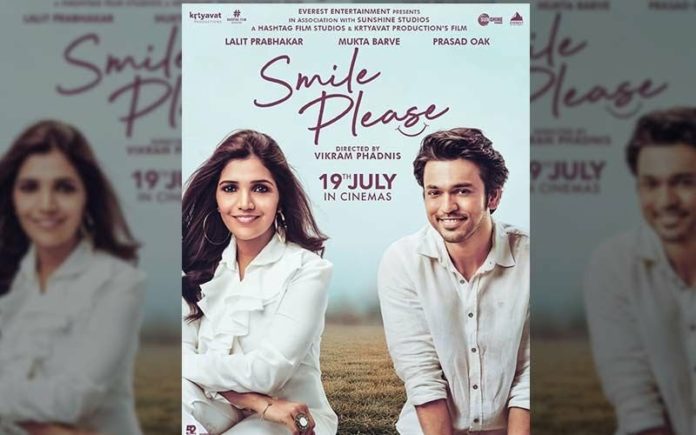 Smile Please the Marathi film which has been selected for the Indian Film Festival, Melbourne this year is going to release today. This movie has created a lot of buzzes not only in Maharashtra but across the country, for becoming the only film in a while to be screened to the Australian audience. The film will mark the presence of Marathi cinema at the global level since it is selected for the National film festival.

Mukta Brave is the female lead cast of the film playing the role of Nandini, who is an award-winning photographer going through the bad phase of her life. The role of the male lead cast is performed by Lalit Prabhakar, who helps Nandini to cope up with the bad phase of her life, he does everything he can to make her feel better. Among others, the notable cast is Prasad Oak, Aditi Govitrikar, Trupti Khairnar and Bijay Anand playing some key roles in this film.

This film is directed by Vikram, who is a popular face in the Marathi film industry. Both of the lead casts to have previously worked with Vikram two years ago in Hudyantar. Which received a positive response from the audience.

The hashtag #Smileplease is trending on Twitter for the past couple of weeks, it is receiving an overwhelming response from not only the Marathi audience but the other parts of the country as well. Mukta and Lalit are attending promotional events’ day in day out, they are giving everything to promote their upcoming film.

Following the footsteps of king khan were Ritesh Deshmukh and the film director Karan Johar who were among the ones to promote the film on social media.

Smile Please is such a heartwarming film. The film is a perfect blend of emotions. The film revolves more around the female lead than the male lead. Mukta Barve plays the character of a photographer. And due to some consequences, she dips into depression and in that time the Lalit Prabhakar character helps her out.

How he does that and how he manages to fight his internal battles is what the film is about. Apart from the dark shade, the film has a fair share of comedy. But it is the emotions that run the film. And Rohan-Rohan’s music lifts these emotions to the next level. Milind Jog’s cinematography is top-notch. Director Vikram Phadnis presents you with a heartwarming movie. Do consider watching it.