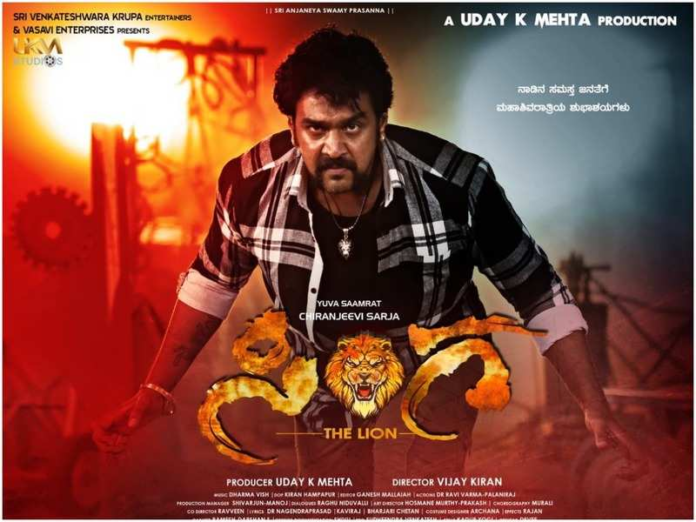 Chiranjeevi Sarja is gearing up for his next release today Sinnga. Singa is a new Kannada action and romantic movie, Featuring Chiranjeevi Sarja in the lead role. Its is a complete family packed entrainment movie. We can see Aditi Prabhudeva in the female lead.

Singa is a youngster who leads his life in his own terms and doesn’t believe in love or marriage. But his mother wanted him to get marry and settle down. The Songs are top-notch and made a hit list. With punching dialogues of Chiranjeevi Sarja and Ravishankar, this movie is already made its own impression by the music and the song “Shane Top Agavle”. The song is turned out to be the new anthem for youngsters in Karnataka. The director Vijay Kiran said there is a lot more in the movie, Action, Drama, Romance, and comedy.

Director Vijay Kiran said, Chiru understood what the scene needs from him,  and he delivers exactly the same. The whole is shot in and out of Mysore. They are saying Chiranjeevi Sarja has reinvented as a mass actor. Considering this one as action flick movie, stunts are very important, and it is done by stunt master Ravi Varma. So you can able to see the action of Tollywood or Bollywood films.

Music directed and composed music by Arjun Janya, Cinematography done by Kiran Hampur and edited by Ganesh Malliah. This movie is directed by Vijay Kiran under the UKM Studios banner. This movie is produced by Uday Mehta. It is a completely commercial movie with full of entrainment.

Well, to give a short review of the film, I would say, if you like out and out commercial movies, then this one is for you. The film is filled with songs, fights and routine comedy track. If you enjoy these elements, then you can watch the movie.

As the main lead, Chirranjeevi Sarja gave a high voltage performance in the movie. Fights, Dance, Dialogue delivery and romantic scenes, everything was well managed by the hero. The female lead does good in the limited screen time that she gets.

Dhrama Vish, as the music director, has given nice beats for the dance numbers and has also given a good background score. The cinematography of Kiran Hampapur is colorful and power-packed. The director Vijay Kiran took a regular story what somewhat managed to tell it in a different way suitable to the Kannada audience.

If you love the commerical cinema and you are looking for a movie this weekend, then you can consider this.