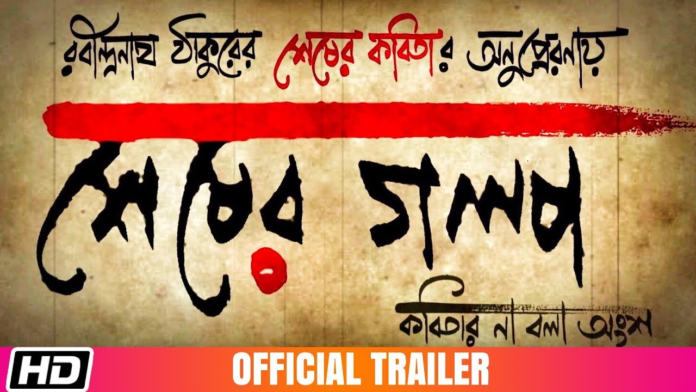 Shesher Golpo, a Bengali-language romantic drama, directed by Jiit Chakraborty, released today under the banner of Swastika Film Production. As the name suggests, the film is an extension of Rabindranath Tagore’s famed novel Shesher Kabita.

If you have ever wondered what an elderly Amit Ray or an older Labanya Dutta would look like today, what could happen when the two star-crossed lovers met once again, you might find one probable narrative in debutant director Jiit Chakraborty’s extension of the novel in his newly released film Shesher Golpo.

The story takes place between two couples of two different generations. Amit Ray, the protagonist of Shesher Kabita runs an old age home with his friend Narendra. Post her retirement from service, Amit’s former paramour Labanya, comes to stay at his old age home while on the other hand, Labanya’s nephew Akash falls in love with Amit’s daughter Kuhu.

Years ago, destiny compelled the young lovers Amit and Labanya to drift apart, leaving them no choice but to move on with their lives. Now in their waning years, the two meet again but complications still prevail when one’s daughter falls in love with the other’s nephew. Will Kuhu and Akash have to face the same fate as their elders?

The film starts after several decades of separation between the protagonists Amit and Labanya. As the plot progresses, the emotional bonding between the two begins to rebuild alongside the parallel narrative of a younger couple Akash and Kuhu, between whom love is newly blossoming. Will the young lovers face the same fate as their elderly counterparts? Will Amit and Labanya get to unite at the end of Shesher Golpo? That is what the film delves into.

I don’t want to discuss the technicalities of the movie, I just wanna say please watch the movie with your whole family. The film is beautiful in all aspects. The story is amazing and blissful to watch. The actors have delivered terrific performances.

The background score and music was beautifully composed by Joy Sarkar while the lyrics have been written by Rajib Chakraborty. Noted singers Rupankar Bagchi, Nachiketa Chakraborty, Kaushiki Chakraborty, Anupam Ray, Somlata Acharya, and Lopamudra Mitra have rendered their voices to the songs in the film. I’ve mentioned these names because these have done a terrific job with the movie.

You all should definitely watch this film. Anyways, congratulations to the cast and crew of Shesher Golpo.