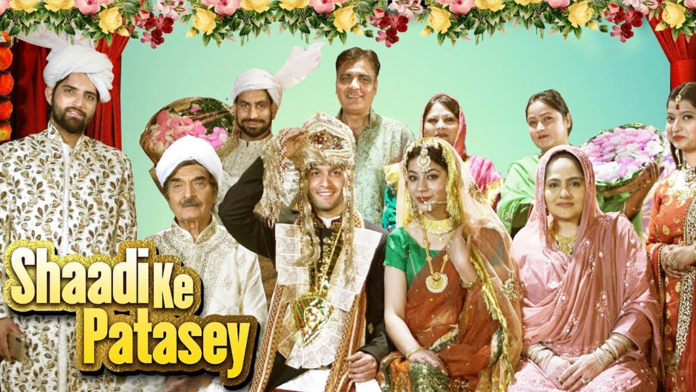 “Shaadi Ke Patasey”, is the latest in the list of Bollywood movies which is set to release today. The film ensembles a new star cast with an off the trend story and screenplay. The trailer of the film was launched last month in June.

From the trailer, one can see that the approach of the film is very different and the director Shahid Kazmi, who also happens to be the co-producer and the editor of the movie, appears to have delivered a promising movie even with a new star cast.

The film is a comedy family entertainer and has clean comedy which one can watch with the family without feeling any discomfort, which is quite rare in today’s time. The story is written by Tariq Imtyaz and Sajad Khaki.

The film depicts the story of a family and its struggles with the ups and downs of life. A newlywed couple, Firoz and Ayesha, are trying their best to keep up with family tradition and values. They discover the challenges of married life around family-related disputes which intimidate and try to blemish their marital delight.

In the midst of all the drama, Firoz must figure out a way to keep every member in the family together. How they manage to overcome the challenges or they too succumb to the challenges, forms the rest of the plot.

From the face of it, the movie appears to be a mixed bag of comedy and drama and has its own moments of the fun element, which will be of interest for the audience. For those looking for something new and have a different taste and are done with the commercial movies, this one is your kind of story. Book your tickets now while the ticket counters are rolling.

Let me start off by saying, Shaadi Ke Patasey was a ride full of emotions and comedy. It was a jolly ride. You might feel the production quality was little low but the emotions and content are on point.

This movie is set in Kashmir and it is also targetted to cater for Kashmiri audience. And t does full justice to the culture of Jammu and Kashmir. The scenes are very raw and realistic. The quarrels within the family were hilarious to watch. The way the couples quarrel with each is a treat to watch.

And the female lead’s ideology and actions are fun to watch. All the actors have performed well. Shahid Kazmi’s songs are nice to hear. The montages were beautifully shot by cinematographers Luxmi Chand and Shahid Kazmi. And the director also did a great job keeping it all together. So I wanna conclude by saying, its a family entertainer, do consider checking it out.