What is the show about? Is it worth watching? When is it releasing? Let us find out about Selena + Chef Season 3: Official Release Date, Trailer and Confirmed Guests!

Selena Gomez stars in an unscripted cooking series filmed in her home during quarantine. Each episode features Selena tackling a new cuisine and guest stars a different professional chef, where they cover tips and tricks and how to deal with disasters in the kitchen. For each episode, the show donates $10,000 to the charity of the Chef’s choice, often food-related. 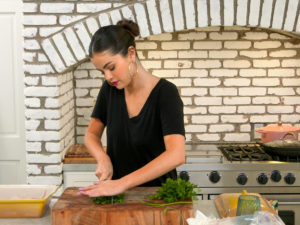 The answer is Yes! In April 2021, the series was renewed for a third season. We will soon be having another season of the show. Stay tuned for the latest updates!

The wait is finally over! Here is good news for all of you. Season 3 premieres on 28 October 2021 only on HBO. Save the date!

She’s back and she’s blonde! Hope you’ve practiced your knife skills because Selena Gomez is serving up a whole new season. Joined by a slate of all-star chefs, they’ll make the ultimate recipes: seafood fit for a soirée, South Indian brunches, liquid nitrogen ice cream, and even her favorite meal yet (any guesses what it is?)

On the show, we will be having Aaron Sanchez, Ayesha Curry, Esther Choi, and Fabio Viviani. Also, we will be having Gabe Kennedy, Jamie Oliver, Kwame Onwuachi, and Padma Lakshmi. Richard Blais, Sophia Roe, and many others will be there on the show too!