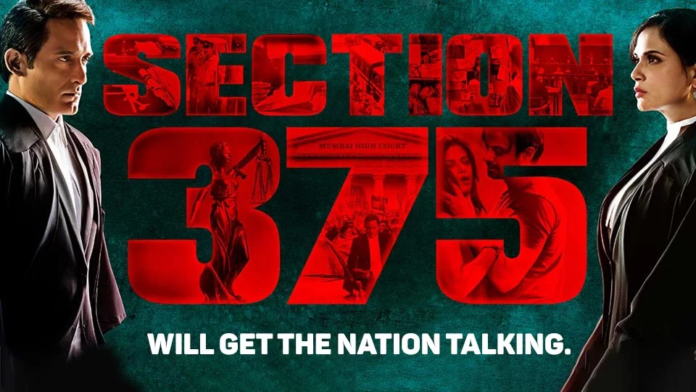 A much-awaited courtroom drama starring Akshaye Khanna and Richa Chadha has finally arrived at theaters near you. A certain section of film lovers has been eagerly waiting for this film for a while now. And it’s finally here.

Makers of Section 375 have conducted many celeb screenings and press screenings over the past few days. Although we didn’t attend any of them, we are writing this review after watching the premiere of the movie.

Directed by Ajay Bahl, Section 375 is written by Manish Gupta. The background score is composed by Clinton Cerejo. Sudhir K. Chaudhary is the cinematographer of the film. Praveen Angre is the editor.

Section 375 screened at Singapore South Asian International Film Festival (SgSAIFF) on 7 September 2019. It was the closing film of the festival and it received great appreciation. So the expectation on the film is pretty high. Will it live up to the expectations? Let’s find out.

Synopsis: A filmmaker stands trial when a costume assistant on his movie accuses him of rape.

With this gripping premice, the film stars when the trail starts. This courtroom drama is one of the best that you will see in Bollywood. Akshaye Khanna and Richa Chadda playing the lawyers have nailed their characters to perfection.

Its two people show all over. The film has a grippy and crisp screenplay. Never in the film you will feel that a scene is unnecessarily dragged. The script is also perfect, the twists and turns the case takes keeps it engaging.

The film also takes you through an emotional ride. Dealing with such a sensitive topic, makers have taken perfect care of the project. There are literally no negative points that one can point from the film.

Overall, it’s a movie that should be watched by everyone above 16. Keeping its excellence as a film aside, the film carries a story that is much relevant to our times. It was told as boldly as it could be told. Now its time for the audience to receive it with grace.

Here is the trailer of the movie which you can check out before going to watch the movie: