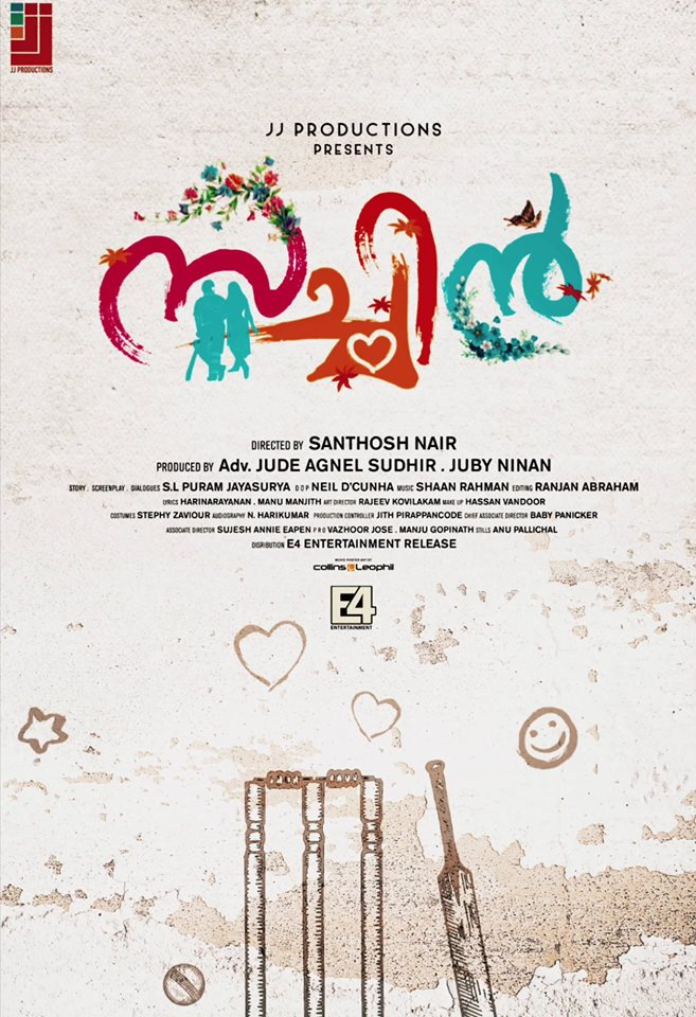 Sachin is a romantic comedy movie with Dhyan Sreenivasan in the lead role. The movie is set against the backdrop of cricket. “It’s a story that happens with cricket as the background. It’s not exactly a sports film but a romcom.” Santhosh Nair, Director said to a reliable source.

Sachin acted by Dhyan Sreenivasan was born on a very special day when the whole nation was celebrating Sachin Tendulkar’s success. Excited by the performance of Sachin Viswanathan named his new-born baby boy ‘Sachin’. Sachin who also formed an interest in cricket had an unflinching devotion towards the cricket God Sachin Tendulkar.

In the meantime, Sachin gets spellbound with a village beauty named Anjali who is portrayed by Anna Rajan. She is four years older than him. This is evidently a reference to real-life Sachin’s wife Anjali who is elder than him too. Even though the love moves on to marriage, it gets canceled on the same fateful day. From here the story moves on to a more serious plot where Sachin has to solve the issue.

The movie’s director is Santhosh Nair who had previously headed ‘Mani Ratnam’ with Fahad Fazil as the lead. This is the second movie by the director. Santhosh has been working as an assistant director for a long time.

Nivin Pauly had done the audio launch of this movie in March. “When the writer — Jayasurya — told me the story, I liked the plot. We all like cricket and have played the game as children. We decided to put that in the background with a lot of love and humor,” Santhosh says.

Aju Varghese, Hareesh Kanaran, Appani Sarath, Ramesh Pisharody, Renji Panicker, Maniyan Pilla Raju, Kochu Preman, are the other noteworthy stars among others. This movie is written by S.L Puram Jayasurya and produced by Jude Agnel Sudhir and Juby Ninan under the banner of JJ Productions. The cinematographer is Neil D’Cunha, the editor is Ranjan Abraham.

The main shooting locations of the film include Punalur, Pathanapuram, and Thenmala which are all in Kollam District of Kerala. The film will be out in theatre on 19 July Tomorrow.

The film is about a son whose father named him Sachin after the famous cricketer Sachin Tendulkar. The movie revolves around cricket. And cricket will also lead to gang wars, betting, love and much more.

Comedy is the only constant in the film. The film is full off the fun film. There is no unnecessary villain kind of role. The film runs smoothly with fun and emotions. The scenes between the male and female lead are nice to watch. Watch this film to add fun to your weekend.