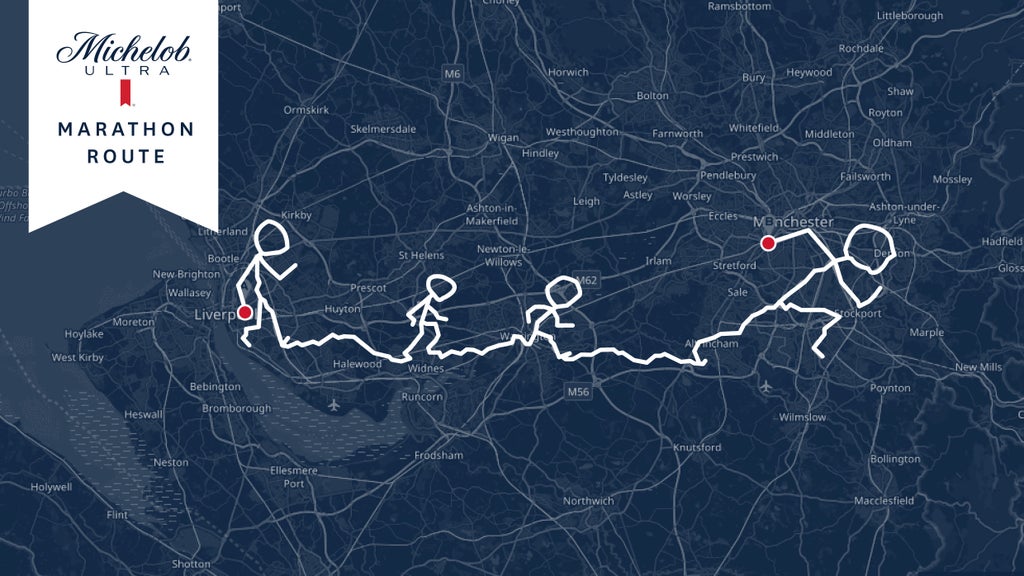 A team of more than 50 runners has united with the aim of creating a world record-breaking piece using GPS and their feet.

The group will travel 250km (155 miles), through Liverpool and Manchester, to create the image organizers claim will become the most significant piece of GPS running artwork ever created.

Guinness World Records and Strava will later verify this piece. It depicts a person going from a walk to running, and covers approximately 100km (62 mi) by 40km (30 miles).

Each participant runs a segment that is between 10km and 20km (12 mi), while some runners run in small groups before passing on a GPS tracker.

Hollyoaks actors Jazmine Franks and David Tag were amongst those tackling the challenge, which traces the route of the Michelob Ultra Marathon and is also raising money for Good Gym – a charity that sees volunteers combine getting fit with helping local communities.

Franks took on the first leg of the journey, passing Everton’s Goodison Park in Merseyside.

“It’s been planned within an inch of its life – I felt I had to be on time, the next person was there waiting for me.

“It’s just epic to be a part of, especially when it’s for charity, raising money for Good Gym and awareness for Good Gym, which is a great charity that works within the community.”

Mark Flint is taking on one of the final legs of the journey on Sunday, and said it was “humbling” to be a part of the challenge.

The 44-year old is running the section as part of a challenge to run at least five kilometers per day in 2021. He also hopes to raise funds for The Christie cancer charity.

“I only really started running two years ago, so to be doing anything like this is beyond my wildest imagination,” the 44-year-old told PA.

“To be part of a world record is crazy.”

Matt Koep, product owner at Michelob Ultra UK, said: “It’s incredible that so many athletes will be pounding the pavements as part of this amazing challenge.

“From some of TV’s most well-known faces to runners of all abilities, it’s so rewarding to be able to get together over one weekend to celebrate our shared love of fitness.”

The runners’ progress can be tracked via Michelob’s Instagram page, michelobultrauk.