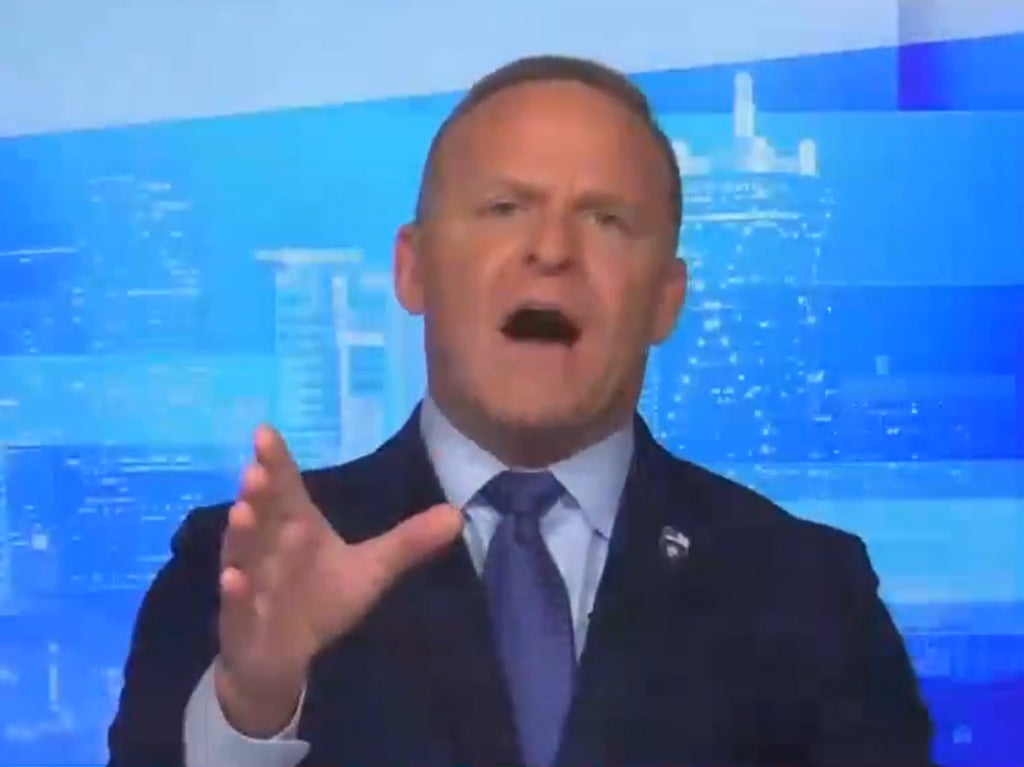 A difference in opinion appears to be a foreign concept for Newsmax host Grant Stinchfield after he cut off a veteran who lightly criticised Trump during an interview on his show – and then the host proceeded to go on a rant about it.

Stinchfield was interviewing veteran Joe Saboe, 36, who was deployed to Iraq a few years back but is now working with his network of veterans from his time in the army and citizen volunteers to help get American citizens and Afghan allies safely out of Kabul before the American airlift ends, as reported by The New York Times.

The clip begins with Stinchfield sharing his thoughts on the current situation in Afghanistan, he said: “I can tell you, this didn’t happen under President Trump. I know there’s a lot of people on the left trying to blame President Trump – he wanted out of Afghanistan real bad – he was real frustrated at not being able to get out.”

Stinchfield then says that Trump didn’t pull forces out of Afghanistan “because he knew this would happen” and added “in fact we all did. I called it on this program.”

He went on to describe the Americans still stranded in Afghanistan as “a hostage situation.”

“But Joe I appreciate you working to get them out, I really do and I wish you all the best, thank you -” the host said.

However, the interview doesn’t end there as Joe then cuts in while Grant was speaking to reply to him: “With due respect Grant, veterans – I being one right? – and our friends are over there, we follow this closely for multiple administrations and we know the Trump administration’s efforts here were fairly weak. They were trying to limit the number of people that would get out and so –”

But Grant then attempted to wind up the interview, interjecting: “– Joe, Joe.”

Though Joe continued his point of mildly criticising Trump: “– there were coordination problems for a long time.”

“I’m already weak, I’m already low on time Joe,” Grant interrupted once more, however this time he had enough and lost his cool as he screamed: “CUT HIM OFF PLEASE, CUT HIM OFF NOW!”

The camera then cuts away from Joe and back to Grant.

Although he told Joe he was running out of time, the host certainly found plenty of it to continue his rant, finger wagging as he shouted: “You’re not going to blame this on President Trump on my show. That’s not happening.”

“Now I appreciate the work that you’re doing, Good Bless you for being a veteran, God Bless you for trying to get Americans out. But don’t come on this program and take the talking points to the left and blame President Trump – that’s not helping anybody.

He then added it was in fact the Biden administration that “screwed this up from the very start.” The host was also not happy that the veteran referred to the people stuck in the country as “non-hostages.”

The extraordinary exchange has been shared to Twitter, and people can’t honestly believe that the Newsmax host refuses to accept any mild criticism of Trump – and some referring to the channel as “propaganda.”

Though unsurprisingly Stinchfield, doesn’t quite see it that way as he shared part of the clip on Twitter and he wrote: “When someone comes on the @newsmax show and blames Pres. Trump for @joebiden‘s Afghanistan disaster. #truthbombs#maga#afghanistan#trump2024”

For a right-wing TV host, Stinchfield ironically doesn’t seem to like freedom of speech, when said speech is in direct disagreement with him…