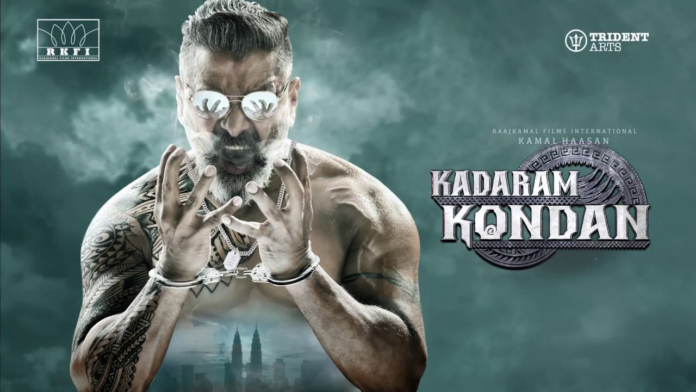 And its a festival day for Chiyaan Vikram’s fans. The much-awaited Kadaram Kondan / Mr. KK has finally arrived on the big screen. The fans have been eagerly waiting to check out their hero’s next film after Saamy Square.

There was much speculation regarding which film will be released first, will it be Gautham Vasudev Menon’s Dhruva Natchathiram or Rajesh Selva’s Kadaram Kondan. And it turned out to be Rajesh Selva’s movie. The film hit the theatres on July 19th.

The film stars Chiyaan Vikram, Akshara Haasan, Abi Hassan, Lena, Vikas, Jasmine and many other foreign and new actors. The film is also released in Telugu as Mr. KK. Fans of Vikram from Telugu states are expected to receive this film with love.

Coming back to film, the music is directed by the talented Ghibran. And the cinematography is done by Srinivas R. Gutha. The film is edited by Praveen K. L. And finally, directed by Rajesh Selva.

Kadaram Kondan or Mr. KK is produced by Kamal Haasan and R. Ravindran under the banner Raaj Kamal Films International. The film is distributed by Trident Arts. The film was announced on 30 August 2018. And the first look was released on Kamal Hassan’s birthday that is 6th November.

The film is rated U/A by the censor board. The film is said to be having a runtime of 121 minutes. This mystery thriller was shot in Kuala Lumpur and Malaysia. Kondaram Kondan is an official remake of French film Sleepless Night.

Considering the previous few films of Vikram, it is fair enough to say that Chiyaan is desperate for a huge box office success. And it is also important for the producers for this film to deliver. So did it live up to fan’s expectations? Will it make the numbers? Are the producers safe? Let’s find out

This is one hell of an action movie. Chiyaan Vikram fans, get ready to witness Chiyaan Vikram like never before. The action scenes are the soul of the movie. The way Chiyaan Vikram performs in those edgy scenes, its an eye candy all over.

Absolutely terrific work by the director Rajesh Selva and Cinematographer Srinivas R. Gutha. Ghibran gives you goosebumps all over the movie. His music action scenes give you an ultimate high.

Apart from action, the dialogues, story, and plot are so much appealing and interesting. As I have said before Vikram has given a great performance, along with him, rest of the cast has also performed exceedingly well. To conclude, I would say its a treat for Chiyaan Vikram’s fans. Congrats to the makers.

#KadaramKondan – The Complete & a Well made action movie. 👌🏻Thoroughly engaging…

For the Stunts, Vikram’s looks & The Music. WORTH it !! @GhibranOfficial’s owns this movie completely🎶🎶🔥🔥

#KadaramKondan – A stylish action thriller which justifies the genre mainly because of top notch technicalities (brilliant action scenes, pulsating BGM), earnest performances of the lead pair (Abi and Askshara) and the macho man Vikram who steals the show.