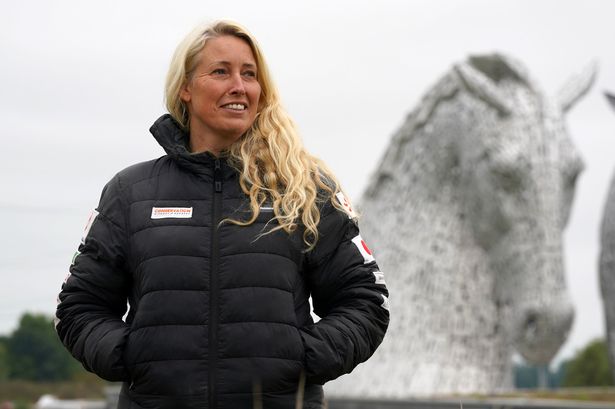 Sacha Dench, dubbed the ‘human swan’ for flying around the UK in a motorised paraglider has been seriously injured in a mid-air crash.

She plummeted from the sky during her 3,000-mile journey after colliding with a member of her crew.

Dan Burton, 54, who was in a separate paramotor, died following the horror smash.

The biologist, a relative of Dame Judi Dench, gained her moniker after raising awareness of the plight of Bewick’s swans by flying from the Russian Arctic to Britain.

Miss Dench and Mr Burton were attempting to complete a circumnavigation of the UK as part of the Round Britain Climate Challenge.

They were in the final stages when disaster struck.

They aimed to fly around Britain in wind and green electricity powered paramotors ahead of the climate summit in Glasgow in November.

My Burton uploaded a final photo on his Facebook page at around 8am Saturday, which showed clouds rolling over the hills near the village of Tongue, based in the Scottish Highlands.

Emergency services were dispatched to the scene of the accident neat Lochinver at around 4.45pm. Despite the best efforts of paramedics, Mr Burton could not be saved.

The Australian native now living in Bristol is the chief executive of Conservation Without Borders, which is running the expedition.

The charity has released a statement: “In the last stages of the Round Britain Climate Challenge, a major incident occurred involving the lead and support paramotors.

“We are very sorry to have to confirm that Dan Burton, the support paramotorist, has died.

“Sacha Dench is seriously injured and is being treated in hospital.”

It added both were ‘highly experienced paramotorists’ and as a result of the accident the challenge has been halted.

Miss Dench is known for her work with migratory species but has since turned her focus to climate change after she lost her family home to bushfires in Sydney last year.

Previous missions, including a flight over the Atlas mountains, have been backed by Dame Judi as well as Sir Ranulph Fiennes.

As part of her latest venture, the paraglider was flying a specially adapted machine which enabled her to take off and land anywhere to recharge the paramotor.

The site of the crash has become popular with paragliders.

Hugh Morrison, councillor for North, West and Central Sutherland, said: “We are seeing more paragliders in recent years, especially in and around Durness.

“It is shocking and upsetting this has happened.’

The British Hang Gliding and Paragliding Association said it would be undertaking a ‘formal investigation’ into the accident.

A spokesman said: “We cannot speculate on the causes of the incident. The investigation report will be published in due course.

“The BHPA can confirm that both pilots were BHPA members and they were qualified to fly powered paragliders.’

This is a breaking news story and is constantly being updated.

Please refresh the page regularly to get the latest updates.

Reporters working on dailystar.co.uk will be working to source the latest information, reaction, pictures and video related to this story.

Or download the Daily Star app for flash alerts on the biggest stories of the day.

Why not also subscribe to receive our regular Daily Star news bulletins? You can do this on this page by simply entering your email address above and hitting ‘subscribe’.

You can also sign up to our showbiz, sport and lifestyle newsletters by clicking here