What is the show about? Is it worth watching? When is it releasing? Let us find out about Hightown Season 2: Official Release Date, Trailer, Cast, and More!

Hightown is an American crime drama television series that premiered on Starz on May 17, 2020. The series is created by Rebecca Cutter and executive produced by Cutter, Gary Lennon, Jerry Bruckheimer, Jonathan Littman, and Kristie Anne Reed and stars Monica Raymund and James Badge Dale.

Jackie Quiñones (Monica Raymund) is a National Marine Fisheries Service Agent in Provincetown, Massachusetts, who abuses alcohol and drugs. She finds the body of a murdered woman, which launches an investigation by Detectives Alan Saintille (Dohn Norwood) and Ray Abruzzo (James Badge Dale) into Cape Cod organized crime and the local opioid epidemic. 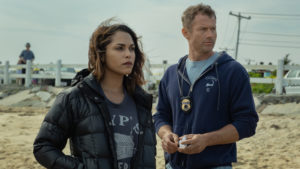 The answer is ‘Yes! In March 2021, the series was renewed for a second season. So we will soon be having another season of the show. Stay tuned for the latest updates!

The wait is finally over! Here is good news for all of you. Season 2 premieres on October 17, 2021, only on Starz. Save the date!

Cast and Characters of Hightown Season 2

Most of the main cast will be returning in the upcoming season. We will see Monica Raymund as Jackie Quiñones, Riley Voelkel as Renee Segna, and Shane Harper as Junior. Also, we will see Atkins Estimond as Osito, Amaury Nolasco as Frankie Cuevas Sr., and Dohn Norwood as Alan Saintille. We will also be having James Badge Dale as Det. Ray Abruzzo, Luis Guzmán as Jorge Cuevas, and Jona Xiao as Daisy. Also, we have Charline St. Charles as Henriette, Dominic L. Santana as Chuleta, and Crystal Lee Brown as Janelle. Cecil Blutcher as Vernon, Carlos Gomez as Rafael, Barbara Weetman as Callie, and many others will be there on the show too.