Hawkeye Season 1 Reviews: Marvel’s Hawkeye is complete now on Disney Plus and it leaves the fans full of excitement for Season 2, But as this was the mini-series means 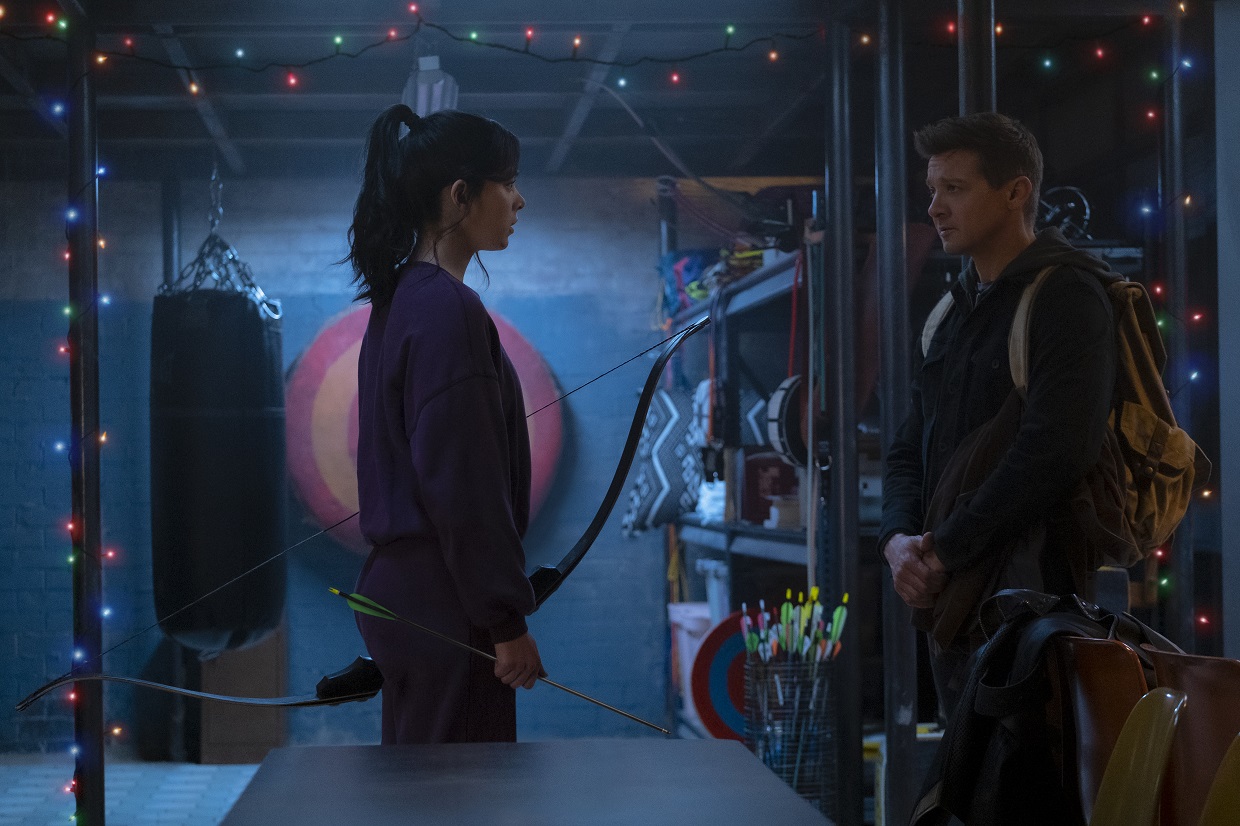 Hawkeye starts Jeremy Renner in the role of Clint Barton AKA Hawkeye and Hailee Steinfeld in the role of Kate Bishop, the story revolves around Hawkeye and Kate’s adventure during the Christmas in New York, where they fought with the Tracksuit Mafia, Maya aka Echo, and Black Widow’s sister Yelena Belova (Florence Pugh). Season 1 was started with the tribute to the Avengers in the form of “Stage Show of avenger’s fight of New York against the Chitauri” which was well executed in episode 1.

We also came to come about the origin of one new hero Kate Bishop (who will be our next Hawkeye), when she was saved by Hawkeye (Clint Barton) in the war of New York, where her father died in the war and she and her mother Eleanor Bishop were saved by the Avengers. Since then Kate started worshiping Hawkeye as her role model and trained as Archer from her school time.

Later with the progress of episodes, we came to know about the stepfather of Kate Bishop Jack Duquesne (Tony Dalton) and her mother’s connection with the main villain of the show Wilson Fisk aka King Pin (if you have seen Marvel’s Daredevil series on Netflix, you should remember the Mafia and Drug-Lord). So the Series itself was full of easter-eggs from Marvel Universe and Comics.

Hawkeye is the master-piece from the duo Bert and Bertie as the comic book adaptation of Hawkeye’s characters are really very awesome, almost every element of the comic book has been derived and composited in the series. I mean from the costume and colors of Kate Bishop, the unique comic book type intro of the show has created really a mesmerizing effect in the minds of fans. The show has already got 8.1 Reviews out of 10 on IMDb.

Earlier the pace and action in the episodes were not that good and fans were expecting more but after Hawkeye Season 1 episode 2 the fans were really crazy with the hand-to-hand combats and, the action-sequence were just flowless as per the users on Twitter. Surely it’s a masterpiece to watch.

As a Marvel Comics fan, I can relate to the mid of creative director and the creators who had taken really a different approach than what marvel actually do, the fluorescent colors due to Christmas and the storytelling idea is really impeccable. The characters from comic books like Maya or Echo, Swordsman (Jack Duquesne), Kate Bishop, and Tracksuit Mafia were really untouched and had maintained their comic book appearance in Hawkeye Season 1.

Characters added to MCU in Season 1

The characters like Kate Bishop, Jack Duquesne or swordsman, Kingpin AKA Wilson Fisk, Eleanor, Tracksuit Mafia, Echo, or Maya (whose TV series has already been announced by Marvel) will surely be part of the upcoming movies and tv series by marvel.

Hawkeye Season 1 has introduced the female Hawkeye who is Kate Bishop and we will see her actions by her in the upcoming movies and TV series of Marvel most probably in the ECHO’s TV Series and the probability in the future she will become the part of Young Avengers along with Kamala Khan of Ms. Marvel (which is also a TV series by Disney Plus, will be released in coming years).  Hawkeye Season 1 was just about how she became Hawkeye from just Kate Bishop, how trained by Clint Barton in Archery and trick arrows.

In Hawkeye Season 1, the character of Maya (played by Alaqua Cox)  was also introduced who is behind Ronin who had killed her father and to know about the identity of Ronin she fought with Hawkeye and Kate Bishop, right now in the series she is the boss or in charge of Tracksuit Mafia in New York which is run by Fatman or Wilson Fisk. At last, she gets the answers which she was expecting from her childhood.  We all know she was raised by Fisk and trained in various combat techniques, and at last, we came to know that her father was killed by Wilson himself who has been referred to as Fatman in the series in earlier episodes.

About her future, in MCU we can see that she will a pivotal part of MCU soon as Marvel has dedicated a TV series in her name “ECHO”. So next we can see her in Echo Series. If you are familiar with the character in comic books she has a half-blood of vampire ‘Blade’ and marvel is planning the Blade’s movie too so we can probably watch her again in the movie.

As she is one of the prime-antagonist of Daredevil and Daredevil is finally a part of Marvel Universe thanks to Spider-Man: No Way Home. And the multiverse is open we can have infinite possibilities for every character in MCU.

Who can forget the character from Marvel’s Daredevil and his ideas of making “New York a Better place” as Daredevil and Wilson Fisk both are in Marvel Universe now so very soon we can have a Daredevil movie by Marvel which will certainly feature our own Kingpin. Wilson Fisk is a major villain of Daredevil and Spider-Man in Comicbook so we can also expect him in the Spider-Man Movies too.

Season 1 was full of new character introduction and establishment of a connection between a few old characters like Yelena and Hwakye, Yelena and Kate Bishop. and Episode 6 was more than a full-length MCU movie as its run time in 59 minutes. The fans have got almost everything that they were looking for from the Hawkeye season 1 from the last and final episode 6 of the show.

Although the Creator has already announced that Hawkeye is a limited series like The Falcon and the Winter Soldier, we can also predict that as the fans have really liked the characters and plot of the show MCU can follow the story of Kate Bishop in the Hawkeye Season 2.  As the directors, Bert and Bertie has already told comicbook that

“It’s exciting to hear fans clamoring for a Season 2,” Bertie told Buzzfeed. “We can’t say anything. I think that’s when you know you’re doing something right and that people are really satisfied. They’ve been around for this rollercoaster and they want more. More Kate, more Yelena, more everything. It’s the Marvel Cinematic Universe, so these stories continue, right?”

So, let’s cross our fingers and wait for the collection report of the Hawkeye Season 1 then we can predict something about Season 2.

Hawkeye Season 1 is over, and it left every heart who felt at least something for MCU with a sense of amusement just because of the treatment of the series and its direct adaptation from the comic books. I will recommend everyone to please watch the series on Disney Plus as all its episodes are out now and you can easily binge-watch the whole series. Season 1 left us with various easter-eggs and questions which we will cover in another article. SO please follow u on Google News which link is given below.