Guardians of the Galaxy Vol.3: Release Date and Cast

It will be the thirty-third in the Marvel Cinematic Universe and the tenth installment of Phase 4. The film is yet to be released as expected on May 5, 2023.

Blue Story Explanation – Everything We Know

We will talk about the upcoming movie with the introduced and exciting characters, the plot twist and other changes after phase 3 of the MCU.

Is this James Gunn Last Mcu or Guardian’s Movie?

In an interview with Entertainment Tonight, James Gunn revealed that this will be the last film in this franchise. Sounds like Gunn won’t be directing or working with MCU movies?

Well, no one can say that for sure. He also said, “I’m a guy who never says never, but there are people who still come back even after saying never.”

But he has assured fans that this will be his last Guardians movie.

The filmmaker confirmed that production will begin in Georgia in November and the title was confirmed by Gunn as “Guardians of the Galaxy Vol.3”.

Outlander Season 5 Where can I watch this fantasy sci-fiction drama? More updates!

While the director spent two years making “The Suicide Squad” and the HBO MAX TV series “Peacemaker,” he said the script was finished years ago.

He said there are a few small things that need to be done as a finishing touch to a new design. Look what he said:-

As we see, the sequel of this movie came in 2017 and it was a huge hit because the MCU fans loved every character the way it was portrayed. As the director said the script was complete, what were the reasons it was delayed.

What went wrong? Reasons for delay of filming?

Who’s back in Guardians of the Galaxy Vol.3?

Since we’re not sure who will be back in the film, we can assure you that the main characters will be there while the other cast has been talking about the film.

We can see Chris Pratt as Star-Lord, Dave Bautista as Drax, Karen Gillian as Nebula, Bradley Cooper as Rocket Raccoon, Vin Diesel as Groot and Pom Klementieff as Mantis.

But after the events of Avengers: Endgame, we’ll be able to see Zoe Saldana when Gamora returns, so we’ll see her again.

The fans know that Gamora was killed in Avengers: Infinity War, but she was introduced from the past timeline of 2014 and after Tony Stark saved the day by beating Thanos, she went missing.

Zoe Saldana has stated that she wants to explore the bad side of her in the third Guardians movie.

As the new movie “Thor: Love and Thunder” is coming, there may be a crossover of the Guardians of Thor in the third Guardians movie.

Is Drax no longer part of the Mcu?

Dave Bautista as Drax The Destroyer will no longer be part of the MCU after the movie Guardians of the Galaxy Vol.3. In an interview, the former WWE wrestler had stated that after the film, “It could be the end of Drax.”

He also said the company isn’t very interested or that it doesn’t fit with the way things are mapped. As far as I know, Guardians 3 will be my last film and the end of Drax.”

There may be rumors, but Drax may be getting a solo movie in the MCU. But there is a catch. The film will be R rated as most Marvel movies to date have not had R rated outings, it could be the first MCU R rated film.

What is the movie about? Is it the end of the story?

There are specific plots about the third movie that are wrapped up for filming for now, but it will come to a conclusion that will be epic according to the story that started with the first movie “Guardians of the Galaxy”

After Avengers: Endgame, it looks like it will be about finding Gamora when she disappeared after the big fight with the Mad Titan Thanos.

He also teased that the movie will be pretty heavy in an emotional way that the fans may have to go through.

As Karen Gillian said when she read the script, there were tears because the story is brilliant, funny and emotional and all the things it takes to show in the movie.

Coming back to Ayesha, the Sovereign’s Golden High Priestess, you’ll probably remember in the mid-credits scene in GOTG 2 that she looked at the cocoon where she said the word “Adam”

That’s Adam Warlock, Marvel Comics’ cosmic superhero. They just kind of teased through the credit scenes. Gunn said he will be part of a movie that could be later.

Adam Warlock has a connection to the Infinity Stones shown in Avengers: Infinity War and Endgame, but he was still not introduced. 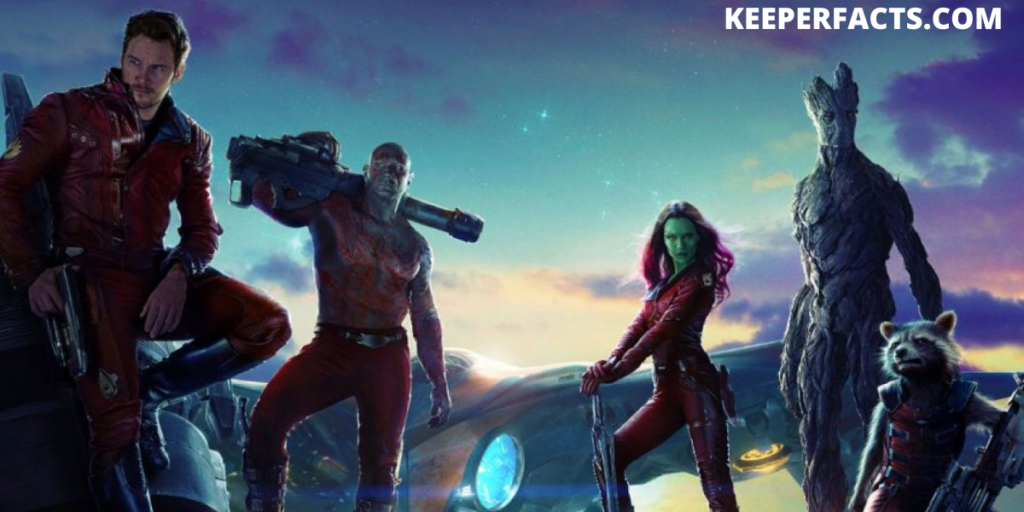 Guardians of the Galaxy Holiday Special on Disney+.

On Disney Investor’s Day, James Gunn revealed that he will be writing and directing The Guardians of the Galaxy Holiday Special, which may be released in late 2022. This will be shown on the online platform in Disney+ that may be connected to the final film.

So, Marvel fans, you could catch up on all of these to understand the story before watching the final sequel to this great movie.