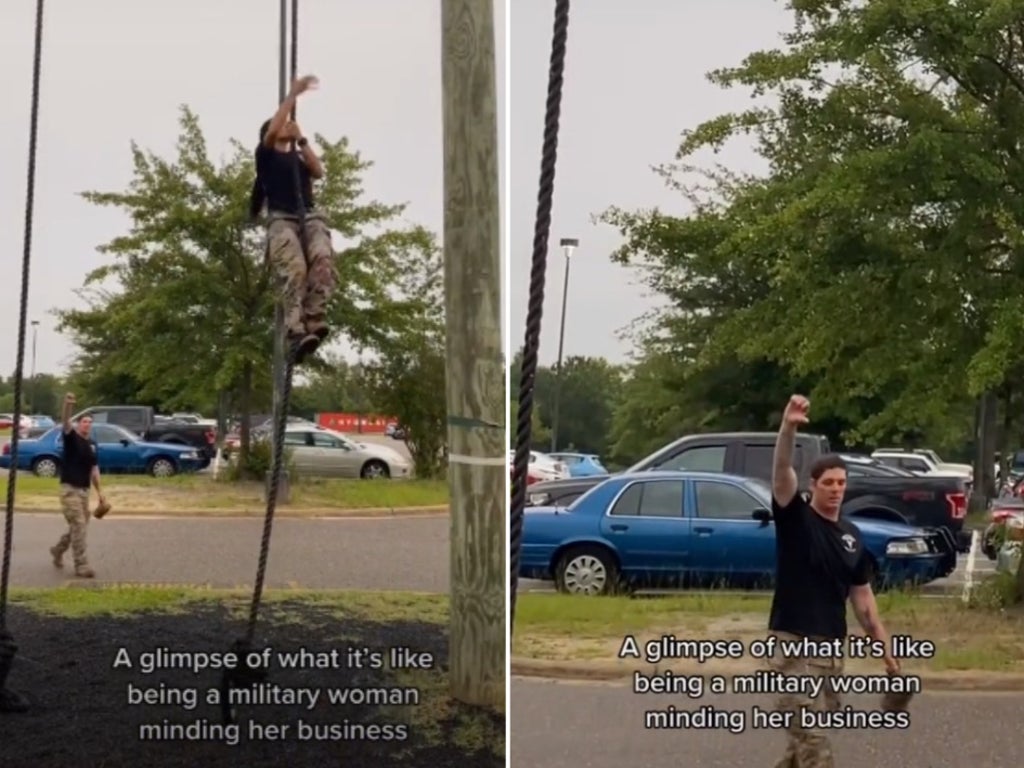 A female soldier was filming herself climbing up a rope during training when a male colleague decided to intervene and share his thoughts on her efforts (that she never asked for).

As the TikToker who goes by @solesndsouls climbed the rope, the man – also wearing military uniform – entered the shot and proceeded to give her a thumbs down as she continued to climb the rope.

Despite the rude gesture, the woman did not appear fazed by the man and wrote for the on-screen text caption: “A glimpse of what it’s like being a woman in the military minding her business.”

Though she did appear annoyed at the man after writing the caption: “I could go on for days about this MF [motherf***er]”

Since posting the video, it’s been viewed 4.6m views and has received over 1.2m likes, with people took to the comments section to berate the man’s actions.

One person wrote: “Dude outed all his insecurities without saying a single word.”

“The fact that he didn’t dare do this to your face though lol, he straight ghosted before you could see him,” another person said.

Someone else added: “Within the context of the military this is actually so scary, please be careful around servicemen like this.”

“I’m confused as to why he did that. She’s just climbing a rope? Why was he so emotional?” A fourth person questioned.

Though there were some comments that questioned whether the thumbs down was directed to the TikToker.

One person added: “I really feel like this had nothing to do with her! Cuz [sic] the thumbs down doesn’t make sense at all… at all!”

To which the woman hit back and said in response: “If it didn’t I wouldn’t have posted it. I know this man. I’m not an idiot.”

@solesndsouls then decided to provide some further detail to the situation, after someone left a comment on her previous post saying: “If you know the history of the military, especially as a black person and you still join, you don’t go in half cooked.”

“What this person is suggesting is that as a Black woman, or as a Black person in the military, being Black in the military comes with harassment, and it should be expected,” she explains the person’s comment.

“As a Black woman, or as a woman in the military, I would be a fool to walk into any situation and think that there wouldn’t be some sort of unfair treatment, or not expect it at all.

“But as a leader who is also a woman and is also a Black woman, it is my responsibility to call out those unfair behaviors, treatments, whatever and make sure they cease to exist. Just because they’re there, doesn’t mean that they’re supposed to be there.”

She also didn’t pull any punches when it came to the rude man from her previous video and proceeded to call him a “hating ass b**h.”

The TikToker concludes: “I understand that the military’s past suggests that anyone who isn’t a white male will face some sort of struggle, but if we are working towards a future full of equality, then it is my job to call out behaviors that single out people that look like me just because I look like me,”