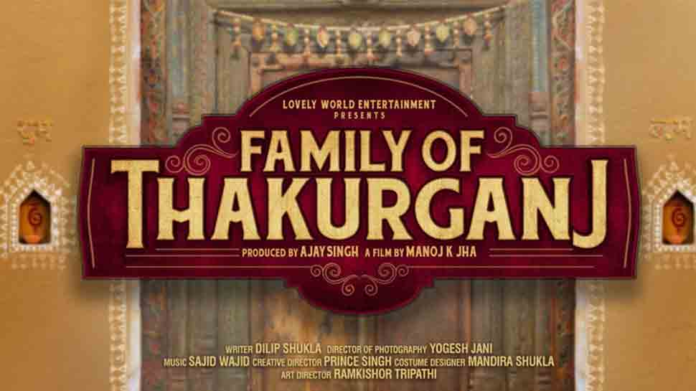 “Family Of Thakurganj” is an Indian, Hindi-language, drama film which has been released on the big screen today. The film is set in the small town of Thakurganj. It is directed by Manoj K. Jha while the production of the film is done by Ajay Kumar Singh. The film stars Jimmy Sheirgill and Mahie Gill and describes the impact of modern society on traditional values in a typical family.

The story of the film revolves around two brothers, Nunnu (Jimmy Sheirgill) and Munnu (Nandish Singh), who live in a small town in Uttar Pradesh named Thakurganj. Both the brothers have different values inculcated in them. While one takes the law into his hands, the other one is sincere and abides by the law.

One day, suddenly the death knocks the door of their father and he leaves the world forever. After that, Nunnu takes responsibility for the whole family on his shoulders. He also runs the business with his wife named Sharbati (Mahie Gill). In a very short span of time, he becomes a famous goon in Thakurganj and comes to be known as “Bhaiya Ji” by the people of the town.

Their life takes a U-turn when the presence of brutality all around the town starts influencing their personal lives.

To deal with this critical situation while having different ideologies in life, will both brothers distant themselves or stand together against the injustice they suffer? That is something you will come to know only after you watch the film!!

Review Of Family of Thakurganj

The concept of the very powerful and interesting yet the screenplay makes it feel like an average film. There are many good scenes in the film, but the director fails to keep them together. Some comedy scenes in the movie make you laugh. Though, most the comedy of error scenes fails to make you laugh even after trying to tickle you with the background score.

The actors starting from Jimmy Sheirgill, Mahie Gill, Saurabh Shukla, Sudhir Pandey, Supriya Pilgaonkar to Pavan Malhotra have done a good job. But it is the plot that makes them look like bad performers. However, the actors will entertain you in bits and pieces. Saurabh Shukla has delivered a great performance as always. Jimmy Sheirgill was also impressive.

If we talk about the movie overall, it’s not at all an appealing drama. The story is too average and the plot is quite weak. Also, the film’s length and humor are troublesome. Had the director put more focus on the story, he would surely have been successful in creating more audience.