Doctor Who Eve Of The Daleks Updates: Time Loop Revealed!!

Doctor Who Eve of the Daleks Updates: When the BBC’s upcoming New Year’s Day extravaganza “Eve of the Daleks” airs in two weeks, The Doctor (Jodie Whittaker), Yaz (Mandip Gill), and Dan (John Bishop) are trapped in an ELF storage unit and stuck in a dreadful temporal loop with some unexpected guests. We believe you can anticipate who else will be attending the New Year’s Eve events based on the title (more on that below).

We now have some new preview photos as well as a behind-the-scenes look at the production. The most essential lesson, of course, comes from the first image below, in which the TARDIS, to be honest, appears to be in very awful shape. 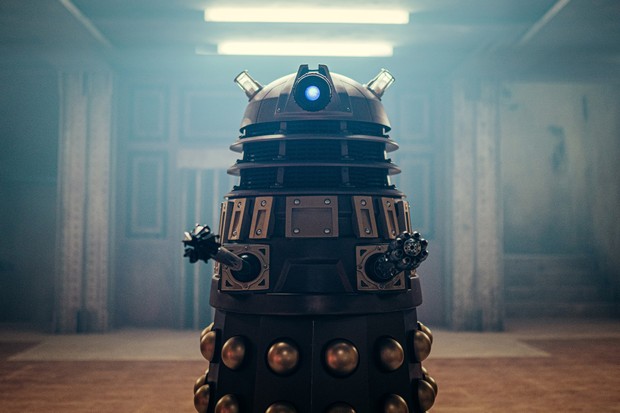 Doctor Who Eve of the Daleks: Time Loop

Those red-colored rips and tears are just as distressing now as they were in prior key art, if not more so now that the cast is involved. Is this a result of the time loop, or a foreshadowing of something more significant that could change the show’s entire nature?

For their New Year’s Day trip, Team TARDIS will be joined by Aisling Bea (This Way Up), Adjani Salmon (Dreaming Whilst Black), and Pauline McLynn (Father Ted). The third and final special (when Whittaker renews as the new and at of this writing unnamed Doctor) will premiere as part of the BBC’s Doctor Who season in Autumn 2022 (the actual date is still unclear as of this writing, but if we had to guess, we’d suggest May or June).

Celebrations of the centennial. But, for now, let’s return to the year 2022, and with that in mind, here’s the first official trailer for “Eve of the Daleks” as well as a special summary:

ELF Storage is owned and operated by Sarah (Aisling Bea), and Nick (Adjani Salmon) is a frequent visitor to his unit on New Year’s Eve. This year, however, their night takes a turn for the worst when they find themselves fighting the Daleks alongside the Doctor, Dan, and Yaz.