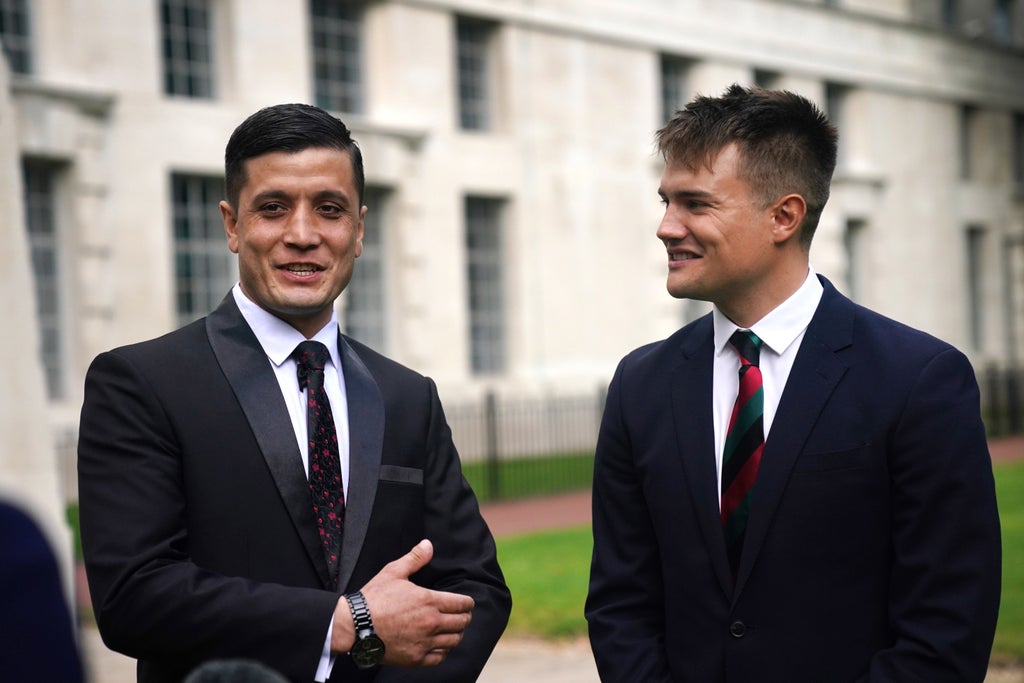 A British Army officer and an Afghan special operations officer who trained together in the UK were reunited at Kabul airport during the evacuation of Afghanistan last month.

First Lieutenant Mohammad Jawad Akbari and Captain Dave Kellett trained at Sandhurst together in 2018. They met again when 1st Lieutenant Akbari was evacuated to Afghanistan under Operation Pitting which Cpt Kellett was assisting with.

They took a picture together while 1st Lt Akbari was being handled by coalition forces.

Cpt Kellett, 25, from Bristol, told the PA news agency: “It was bizarre really. I was actually in the ops room for a lot of the operation when I was there so I popped out to see how my platoons were doing on the ground.

“As I was leaving, my sergeant major looked out into the queue and Mohammad here was in the queue going through the processing centre so I popped out of my vehicle just to go and say hello.”

First Lt Akbari, 30, from Kabul, told PA: “At first I didn’t really believe that (Dave) was right there, it was like ‘wow, shock, my friend is here’.

“We had a handshake and like a warm welcome to him and I appreciate this more, what (the British Army) did back in Kabul, evacuating all these people from Afghanistan from the outside, because the job was quite hard for them as it was so warm and the weather was hard to deal with all the guys having to carry heavy equipment and weapons, and they were just running around asking people what they need.”

The pair met up again in London on Monday as they were invited to meet veterans minister Leo Docherty at the Ministry of Defence and they took photographs next to a memorial for the 457 UK troops killed in Afghanistan since the 2001 invasion.

Mr Docherty said: “We are very clear that the friendship we have with the Afghan Relocations and Assistance Policy (Arap) new arrivals is enduring.

“I think that will endure because the experience that we’ve all been through in Afghanistan really was formative both for the Afghans involved and for the whole defence community.

“We are really keen to afford the same support and friendships that those who supported us when we were in (Afghanistan).”

Cpt Kellett said the diversity of Sandhurst, a royal military academy, and the different nationalities of those that train there as well as the training they were given as a group were reasons why the friendship had formed.

As part of Operation Warm Welcome, First Lieutenant Akbari and his wife have settled in London. Both men said that their Sandhurst contemporaries were thrilled to hear about the reunion.

They said that they would be in touch once they were in the same place.

Operation Pitting involved more than 15,000 people being airlifted from Kabul to safety in August.