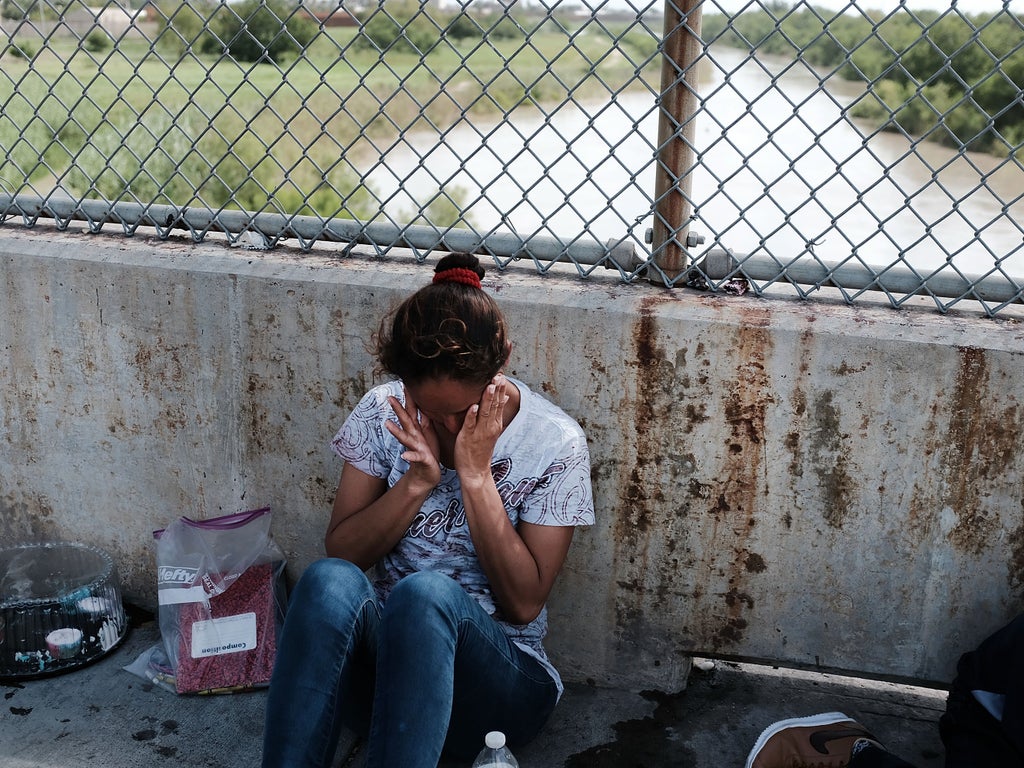 BuzzFeed’s Adolfo Flores penned a report on the predicament, introducing readers to Isela, a woman from Honduras, desperately seeking asylum with her partner of 13 years, Sofia, who have faced years of discrimination for being lesbians. By the time they had arrived to the border, “a man had already injured [Isela’s] spine in an anti-gay attack and she was still reeling from being raped by Mexican police officers,” but this wasn’t enough to convince U.S. authorities the women needed safeguarding.

Isela, whose full name isn’t published due to fear of retribution from Mexican authorities, had applied for “humanitarian parole,” which, In theory, would allow them to at least seek solace in the the U.S. — at the very least, temporarily. But even after having endured homophobic attacks both in their home country of Honduras and now in Mexico — and at the hand of its police force, at that — Customs and Border Protection (CBP) denied the request. The women have been living on the streets of Mexico since, and it remains unclear when — and/or if —they’ll be able to safely relocate.

“I don’t know why the government is closing its door to immigrants like us, we have proof,” Isela told BuzzFeed. “Just like in our country, there is a lot of homophobia and discrimination in Mexico.”

Isela, Sofia, and others are not alone. The Covid pandemic has only made a worsening of an already serious problem for asylum-seekers and migrants. Citing “an obscure public health law known as Title 42 to contain the coronavirus,” the Biden administration has extended the Trump-era policy which promptly “expels immigrants at the border, blocking them from accessing the asylum system,” Flores wrote. The policy is not applied to all, however. It seems that the expulsion depends on their nationality and where they cross. And/or whether border controls decide to put them on outgoing flight or somewhere else.

Immigrant rights advocates and human rights activists strongly criticised the expulsions. They claimed that it endangered the lives of those who were inevitably expelled and suggested that the policy was more about immigration control rather than public health. “Rather than adopt sensible measures long recommended by epidemiologists and public health experts to safely restart asylum processing, the Biden administration has not only failed to end the expulsion policy but has escalated it,” a Human Rights First report reads, adding that “these flights flout public health safeguards and violate refugee law.”

What’s more, Human Rights First tracked at least 6,345 kidnappings, sexual assaults and “other violent attacks” against those blocked and/or expelled from the U.S. since Biden took office, lending credence to activists’ concerns that the policy ultimately puts migrants in more danger — when that’s what they tried to flee in the first place.

Prior to this, Title 42 expulsions were exempted by an ACLU lawsuit. This was to help protect vulnerable immigrants such as LGBTQ+ asylum seekers. But the Biden administration ceased the exemptions after settling with the ACLU, prompting various humanitarian groups aiding in identifying vulnerable immigrants to pause their work as well, as they felt there was “no end in sight for Title 42.”

“Considering the lack of justification of keeping Title 42 in place for health reasons, and the threat of supporting a system that externalizes US asylum in violation of international human rights law, HIAS will discontinue its Title 42 referrals,” Bill Swersey, a spokesperson for the global Jewish nonprofit that helps refugees, said in a statement at the time.

As it stands now, one remaining hope for asylum-seekers hoping to enter the U.S. is “humanitarian parole,” which Isela requested but as we know, was denied — which seems to be the case for thousands of others, as well. Margaret Cargiol of Immigrant Defenders Law Center’s Cross-Border Initiative program in California told BuzzFeed that “humanitarian parole process is highly discretionary and it’s not clear exactly why some cases are approved and similar ones are denied.”

“It’s especially alarming to see these denials now because there’s no other recourse for asylum-seekers,” Cargioli said. “Quite literally, asylum law is dead right now for someone fleeing for their safety.”

Indeed, despite suffering dozens of homophobic attacks, sexual violence and more — at the hands of Mexican authorities, at work, and otherwise— Isela and Sofia still don’t quality for humanitarian parole. Even a social worker at the hospital, wherein Isela was treated after an especially violent homophobic attack, attempted to force her to perform oral sex on him. “He said he would make me like men,” Isela told me about the horrific incident.

“We’ve suffered so much because we’re part of the LGBT community, and we hoped that the US would help us, but instead they closed the door on us,” Sofía continued. “We’re very confused about why we were denied.”

This week, a federal court ordered the Biden administration to cease Title 42 expulsions for families with children, an order which was since been placed on a two-week pause by Judge Emmet Sullivan.

“The Biden administration has had ample time to handle and resume processing of asylum-seekers,” Cargioli concluded. “Asylum is legal, it is an essential service, and a legal obligation the United States must abide by.”