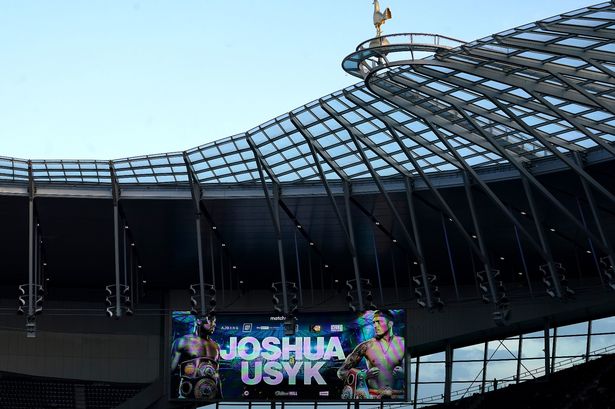 Anthony Joshua fans met the Ukraine national anthem with a chorus of boos before the Brit battled Oleksandr Usyk at the Tottenham Hotspur Stadium.

Both national anthems were played before the two started their ring walks for the bout.

As the anthem was being played, the Sky Box Office camera showed shots of Vitali Klitschko, who hand hand on his heart belting out the anthem, and one of Andriy Shevchenko too.

However, a chorus of boos met the anthem as the crowd remained firmly behind Joshua.

Becky Hill was on hand to lead the crowd for God Saves the Queen before the two headed down to the ring.

We’ll be bringing you the very latest updates, pictures and video on this breaking news story as it unfolds.

For all the latest news, make sure you visit: dailystar.co.uk/sport/football
And you can stay up to date with all the must-see headlines, pictures, analysis, opinion and video on the stories that matter to you.