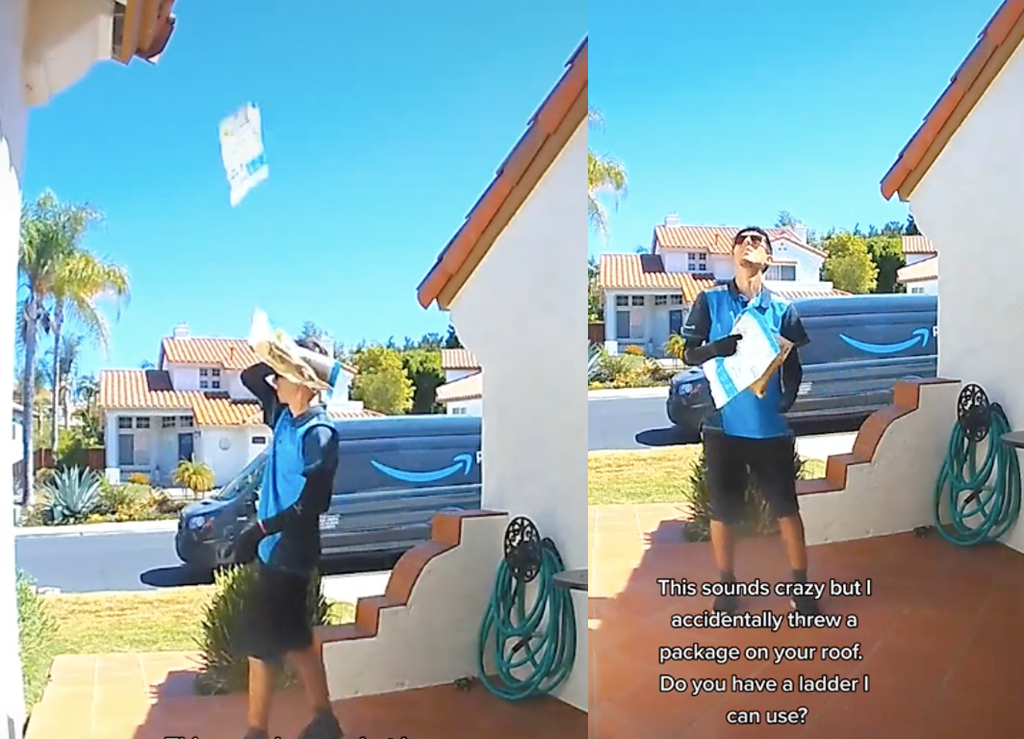 An Amazon customer ended up having to scale the roof of their house to retrieve their parcel following a hilarious mishap with a delivery driver.

Casey McPerry captured the incident on TikTok. The driver can be seen approaching McPerry’s front door after he is distracted by a mosquito.

The driver, who is carrying several packages in one hand, attempts to swat the insect but in doing so manages to lose one of the parcels which flings over his head and lands on McPerry’s roof.

As he tries to find a solution, the driver stares at his surroundings in disbelief.

He finally decides to contact McPerry to find a way to get the package off the roof.

“Hi, this is your Amazon delivery driver. This sounds crazy but I accidentally threw a package on your roof,” McPerry wrote to the driver. “Do you have a ladder I can use?”

Sure enough, McPerry did have a ladder but clearly didn’t see the message until he got home later that day and had to climb a wall and use a torch to spot the package.

“Don’t worry about it dude, it’s all good,” McPerry responded. “I’ll get it down in the morning.”

McPerry answered with a ladder.

“Poor guy, don’t worry about it. Seriously, it’s ok. This made our day,” wrote in the caption to the first video, which has now gone viral after it was shared on another TikTok account where it has racked up more than six million views.

McPerry has also added that he hopes to find the Amazon driver and “share how much laughter this brought us.”

Even Amazon themselves couldn’t get enough of it and wanted to use the video themselves – but Casey said he’ll only oblige if he and his wife can go on Jeff Bezos’ next rocket launch.

However, there is only one thing at fault here and that’s the bug that the driver was trying to swat. Still, it did manage to create a great bit of viral content so we shouldn’t be too mad.