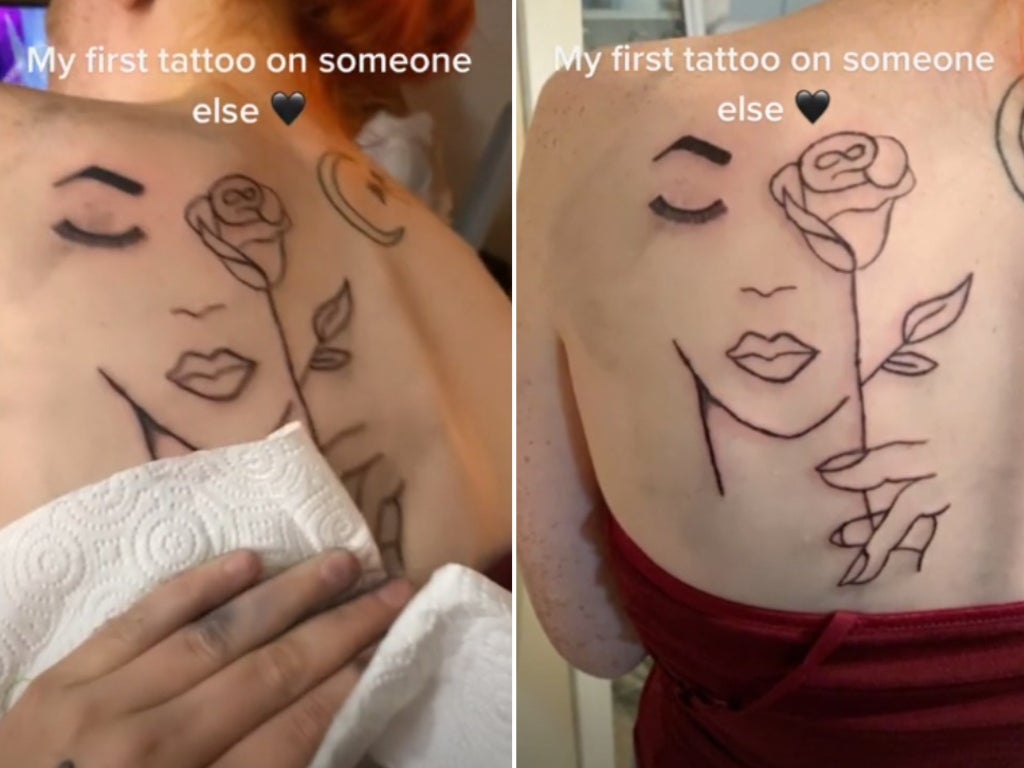 All tattoo artists have to begin somewhere, but one amateur tattoo artist’s first-ever inking has been mocked by people online after she posted a video showing off the design she etched on someone.

TikToker Sam (@descendantofsalemwitches) shared footage, just after finishing her first piece – rubbing down the design located on the red-haired woman’s back with kitchen roll, she revealed a minimalist outline of a woman’s face with a rose covering one of her eyes.

For the caption, Sam wrote: “I have to say it’s not bad for my first time tattooing on someone other than myself. I was nervous.”

In another clip, we get to see the inking from another angle as people took in what the tattoo looked like from a better view. It was clear the design covered a large portion of the client’s back – a brave move considering it was Sam’s first time tattooing someone.

Though many don’t see it this way and think the decision was a mistake while proceeding to mock Sam’s first inking.

One person asked: “Why do something so MASSIVE for your first time?”

Someone else said: “Hopefully it’s your last too.”

“Did you do it blindfolded while jumping on a trampoline,” a fourth person jokingly asked.

Some people chose to offer constructive criticism of Sam in the comments.

One person wrote: “Maybe try something smaller next time, with big pieces you can see every inconsistency in the line and it’s not really beginner friendly.”

“This is why you use practice skins people,” another person said.

Someone else replied: “You gotta start from somewhere but bro. You should have practised more.”

Viewers also shared their concern at the fact it appears from the video that Sam wasn’t wearing protective gloves while tattooing her client.

One person wrote: “If you actually want a future in tattooing, take this down. No decent tattoo shop would hire someone blatantly ignoring biohazard safety like this.”

“No gloves? Did you close your eyes during the bloodborne pathogens training?” Another person asked.

Someone else added: “For a first tattoo you should have done something smaller and most importantly WEAR GLOVES. Hygiene matters more than anything.

Sam, despite the criticisms, hasn’t given up on her tattoo gun.