Although the film started to screen on big screens in the evening, the film still managed to get a lot of love from the audience. Amala Paul’s Aadai is one of the few cases where a film’s first show has started at 6 PM in the evening. However, the audience still rushed into the theatres to check out the movie.

Amidst all the negativity, the Rathna Kumar directorial has left a resounding mark for the audience. The film was released in over 700 screens worldwide. As the movie was released in the evening, by mid-night the audience who have watched the movie, stormed the internet with positive reviews. 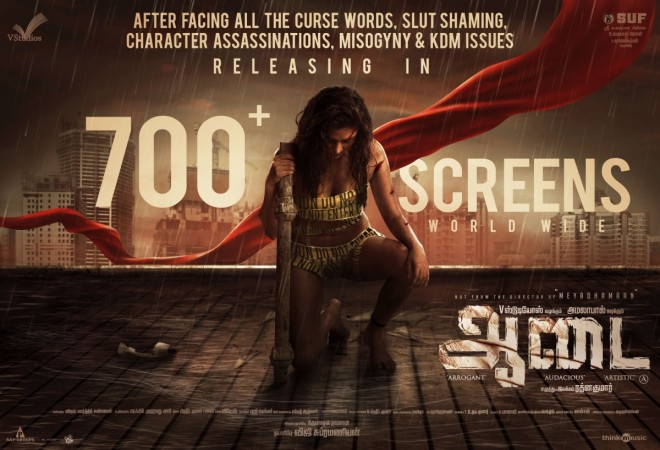 Check out our review and rating of Aadai aka Aame.

The film had a 90% occupancy in Tamil Nadu. And about 70 to 80 percent occupancy in the Telugu states. It would have been more if this movie was a solo release but Chiyaan Vikram’s Kadaram Kondan and political thriller Unarvu are also released on Friday.

Aadai / Aame is said to have collected 2 to 2.5 cr worldwide. The reason behind this is the film lot more than half of its shows as it was released in the evening. And collecting 2 cr in half a day is great news for the makers.

Telugu version of the film, Aame, was also well received by the Telugu audience. The advance bookings for Saturday and Sunday is also great. The only competition Aame has is with iSmart Shankar which is also running great. But, as Aame is not a commercial film like iSmart Shankar, it will have a separate audience to cater too.

And in Tamil, it is competing will be with Kadaram Kondan. However, the Tamil audience will be considering watching both the movie over the weekend. Word of mouth will be helping Aadai in scoring well at the box office.